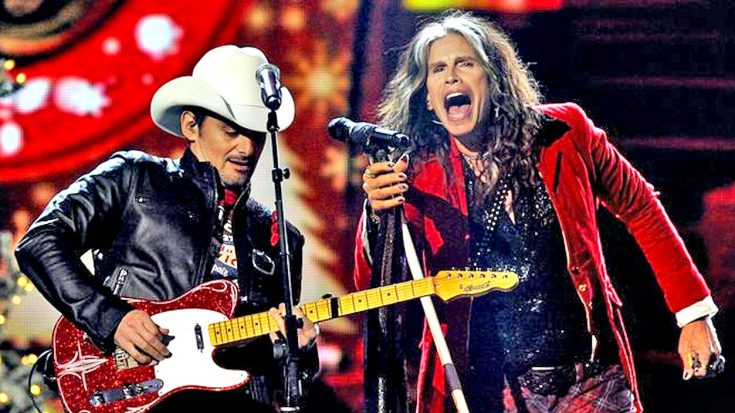 This epic performance will jumpstart anyone’s holiday mood with an electric combination of famed rockstar and unforgettable country crooner!

Tackling one of the most upbeat and fun-filled Christmas classics, both Brad Paisley and Steven Tyler crank up the heat in one of the biggest CMA Country Christmas performances you’ll ever see!

Steven Tyler and Brad Paisley perform during the CMA 2014 Country Christmas on November 7, 2014 in Nashville, Tennessee.

Originally performed in 2014 at Nashville’s Bridgestone Arena, this incredible duet features Paisley and Tyler decked out in red and issuing a powerhouse performance of “Run Rudolph Run” that left the entire stadium breathless.

Steven Tyler and Brad Paisley perform during the CMA 2014 Country Christmas on November 7, 2014 in Nashville, Tennessee.

In a backstage interview, Tyler reveals that the massive collaboration was actually Paisley’s idea. With just one phone call to the legendary rockstar, this killer new version of a classic was crafted!

If you’re looking for an upbeat Christmas song to jam out to while getting in the holiday spirit, look no further than the video below!

This epic performance will jump start anyone's Christmas spirit! Check out Brad Paisley and Steven Tyler as they rock out with electric "Run Rudolph Run" duet.http://bit.ly/2h8G9Qh

Watch this unforgettable duet and let us know if you’ll be adding it to your next holiday playlist!