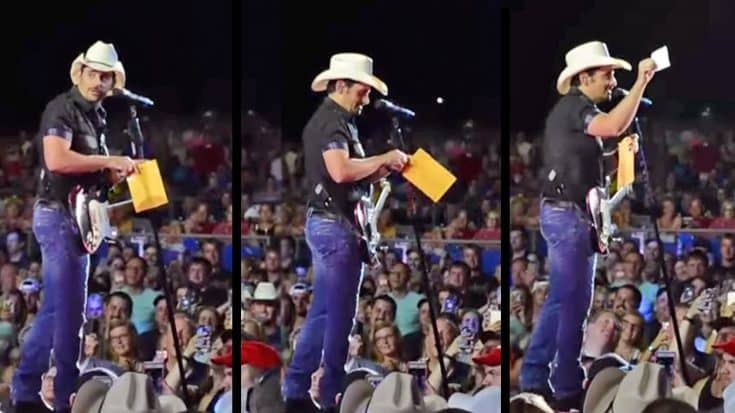 The country star announced that he would be welcoming two of his beloved and die-hard fans to the stage for a surprise that caught the whole audience (and the two fans) off guard!

During some of his recent tour stops, Brad Paisley has been helping his wonderful fans enjoy some of the most memorable times in their life by bringing them on stage for proposals and reunions with deployed spouses, but this latest gesture from the country star is welcoming something new – literally!

Such a fun night playing Laughlin, NV last night! Thanks for having us! pic.twitter.com/cKBfG6YJg5

On Sunday (August 7th), Paisley told the audience he was bringing some people on stage for a special announcement! Once on stage, they handed him an envelope that contained the answer to their long-awaited prayers: their unborn baby’s gender!

Buzzing with anticipation, the audience patiently watched as he held up the envelope, opened it, and then stunned the couple with the answer!

We won’t tell you how it turned out here, so make sure you watch the video below for a great moment in this couple’s life together!