By Miranda Raye on March 23, 2018
Advertisement 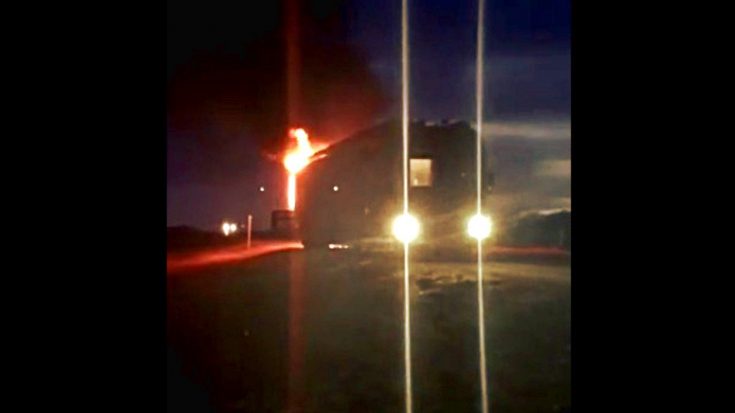 In November, Brantley Gilbert and his wife Amber welcomed their first child together, a baby boy they named Barrett. Since Brantley wanted to take Amber and Barrett on the road with him, he had his tour bus updated to be the perfect temporary home for his family.

Unfortunately, that temporary home is no more.

Last week, Brantley’s bus drivers were bringing his tour bus back from Canada when the vehicle suddenly burst into flames. Brantly was not on the bus at the time, and his drivers made it off in time. No one was harmed.

While everyone on the bus was alright, the bus itself was not. Brantley shared some footage of the fire, and it looks absolutely devastating.

Hey y'all…. adding pyro back into the set…. working out details now… In all seriousness…. thankful no one was injured…. bus drivers are safe…. I'm safe…. see y'all back on the road soon….

Brantley later shared that the fire was a total loss. Many of his personal possessions were destroyed, including guitars, letters, and photographs.

But it was the loss of the bus itself that seemed to bother Brantley the most. “I feel like I kinda lost an old friend a little bit, but we’ll build another one,” he said.

Now, Brantley has finally revealed the believed cause of the fire that destroyed his bus. He spoke about this during an interview with AL.com:

“Everything is scorched. Something apparently in the engine. We won’t know for another week or two. The insurance’s going up to Montana to look at it. Both of my bus drivers are OK.”

Even though he lost his bus, Brantley has maintained a good sense of humor about the whole thing. If you watch the footage of the fire above, you’ll hear his song “Hell on Wheels” over the clip. Go ahead and check out that full song in the video below.

We’re just glad that Brantley and his drivers are all alright!