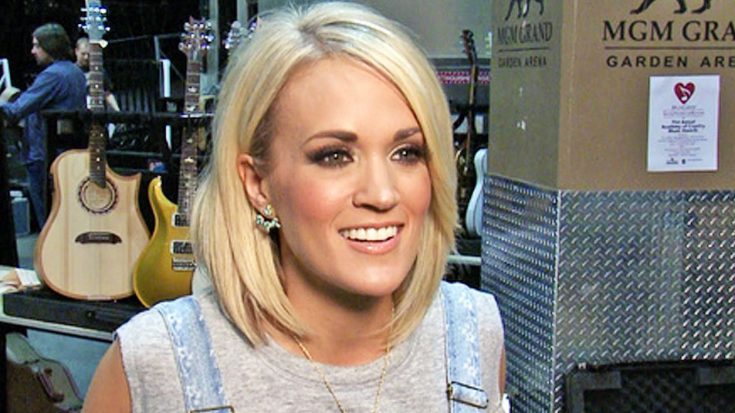 For the past several months, Carrie Underwood has been traveling across the country on her Storyteller Tour. Now that the tour has officially wrapped up, Carrie is heading to New Zealand and Australia to join Keith Urban on his ripCord World Tour.

While Carrie was on tour, she had a special person to keep her company…her son Isaiah. Mother and son seemed to enjoy their travels together, based on the cute photos Carrie often shared of her little boy.

He doesn't care that Mommy had to get ready for a show…all he knows is that he woke up cranky from his nap and needed a cuddle…and I was more than happy to comply. #multitasking #momlife #roadlife #thestorytellertour

As Carrie prepared to take off for New Zealand, she desperately wanted to bring Isaiah with her. Based on a picture that Carrie shared of him on Instagram, it seems like he was all prepped to tag along for the ride.

The picture shows Isaiah sitting inside of Carrie’s suitcase, with no regard for her clothes or shoes inside. He was probably just playing around, but Carrie saw it as the perfect opportunity to make a joke.

“So, I may or may not have smuggled the kiddo into New Zealand with me,” she wrote.

We can’t blame Carrie for wanting to sneak Isaiah into another country! However, she admitted that she didn’t actually smuggle him into New Zealand with her. Instead, she left Isaiah at home with his dad, grandma, and grandpa, saying “I know he’s being spoiled right now.“

Although Carrie knows that Isaiah is being well taken care of while she’s gone, that doesn’t stop her from missing him. “What on earth am I going to do without him for all this time?!?!?!” she wrote.

So, I may or may not have smuggled the kiddo into New Zealand with me…….ok, I didn't, but maybe I should have because I'm already missing him like crazy! But, I know he's being spoiled right now by his daddy and Nana and Papa. What on earth am I going to do without him for all this time?!?!?!

Luckily for Carrie, she won’t be away from her baby boy for too long. Her last show is in Australia on December 17, so she’ll be able to make it home in time to give Isaiah plenty of Christmas cuddles!

Even though Isaiah is Carrie’s whole world now, there was one time in her life when she wasn’t sure if she wanted children. She sings about these feelings and how Isaiah changed her life in her heartfelt song “What I Never Knew I Always Wanted.” You can listen to it in the clip below.