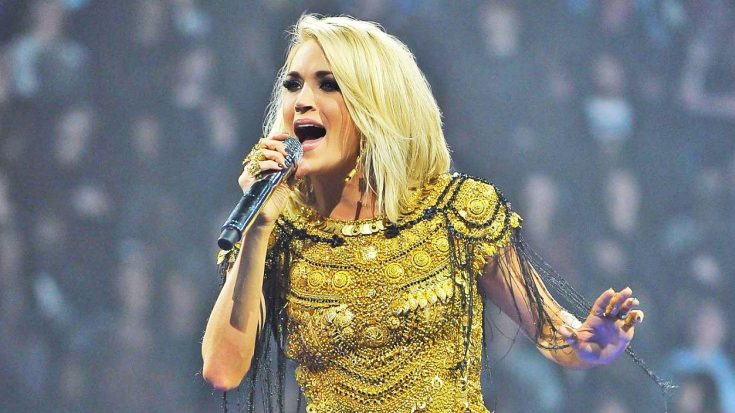 This was supposed to be a huge couple weeks for Carrie Underwood. On Wednesday, November 8, she co-hosted the CMA Awards for the tenth year in a row with Brad Paisley and just over a week later, on Thursday, November 16, she was going to be inducted into the Oklahoma Hall of Fame.

Unfortunately, just a couple days after the CMA Awards, Underwood fell down on the steps outside of her Nashville, Tennessee home and was taken to the hospital for a broken wrist as well as cuts and abrasions. She was set to perform at Country Rising, the star-studded benefit which raised money for the victims of the Las Vegas shooting and the hurricanes that took place in Texas, Florida, Puerto Rico, and the Caribbean.

She took to Twitter to thank fans for their well wishes on Nov. 12.

Thanks so much for all the well wishes everybody…I’ll be alright…might just take some time…glad I’ve got the best hubby in the world to take care of me.

On Wednesday morning (Nov. 15), she revealed on Twitter that she had surgery on Tuesday (Nov. 14) and everything went extremely well.

“First and foremost, we want Carrie Underwood to know our thoughts and prayers are with her during her recovery. She exemplifies the very definition of an Oklahoma Hall of Fame Honoree and we are certain that she will be considered for future induction,” Oklahoma Hall of Fame President and CEO Shannon L. Rich said in a statement, according to NewsOK.

While she is now ineligible to be inducted into the 90th class this year, Underwood is able to be nominated again and inducted into the Hall of Fame in a future class. Fellow Oklahomans and past inductees Vince Gill and Kristin Chenoweth will be the emcees of the event, according to One Country.

Watch Underwood’s latest performance, at the CMA Awards, that is definitely Hall of Fame worthy.