Carrie Underwood Joyfully Reveals Her Date To The CMA Awards 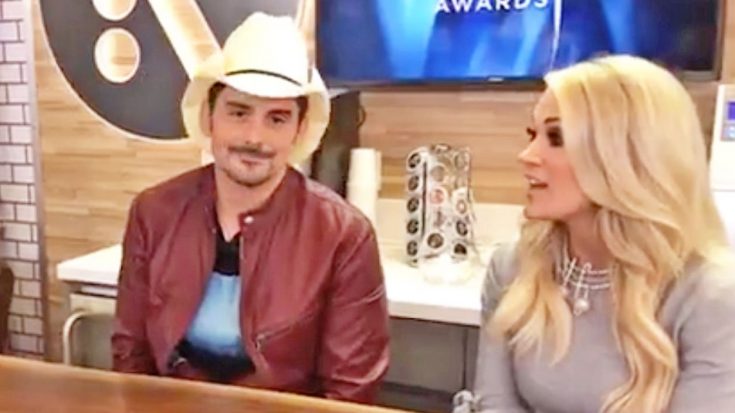 The time is almost here! Country music’s greatest will soon gather in Nashville for one extraordinary night at the 51st CMA Awards.

Scheduled to take place on Wednesday (November 8), the hype surrounding the ceremony is increasing with each passing day. For the tenth year in a row, Brad Paisley and Carrie Underwood will be hosting the event.

As the hosts, Paisley and Underwood basically serve as the “faces” of the CMA Awards. Because of this, they are the ones who make the rounds to all of the media outlets to speak about the upcoming ceremony.

On Thursday (November 2), the duo stopped by the set of Good Morning America to chat all things related to the awards. As you would expect from Paisley and Underwood, the interview quickly took a comical turn.

While they were talking about how they try to be entertaining hosts, Good Morning America‘s Ginger Zee suggested they could spice things up by having Paisley change his outfits as often as Underwood does.

Underwood was in full support of that idea, saying, “I would like that!“

But Paisley didn’t agree, saying, “I don’t know if I like that or not. I’m not sure by the way if that’s good TV.”

Since she started hosting, Underwood has become famous for how many times she changes her outfit over the course of the ceremony. She is also known for her red carpet looks, and often finds herself on best-dressed lists following the awards.

In the past, Underwood’s husband Mike Fisher often accompanied her to various country music awards. But over the course of the past year, Fisher had a jam-packed schedule as the captain of the Nashville Predators hockey team, which went to the Stanley Cup final in 2017.

Since he was so busy, Fisher was unable to attend red carpet events with Underwood. Following the Preds’ successful season this year, Fisher made the decision to retire from his hockey career. Now he finally has some free time in his schedule!

This is something that Underwood is quite excited about, which she made clear during her appearance on Good Morning America. As she joyfully announced at the end of her interview, she’s going to have a date to the ceremony this year, and it’s going to be Fisher!

“I’ll actually have a date this year,” Underwood said with a smile. “My husband’s coming!“

Of course, Paisley had to jump in with a comical remark. “That’s right, he’s unemployed,” he said, prompting a laugh from Underwood and Zee.

You can catch more cute and comical moments by watching Paisley and Underwood’s Good Morning America interview below!

We’re so excited that Fisher is able to make it to the CMA Awards this year!

LIVE NOW: Carrie Underwood and Brad Paisley backstage with Ginger Zee in our Keurig-sponsored Greenroom! They're dishing on the 51st CMA Country Music Association Awards – they are hosting next Wednesday night on ABC!