Carrie Underwood Opens Up About The Possibility Of Baby No. 2 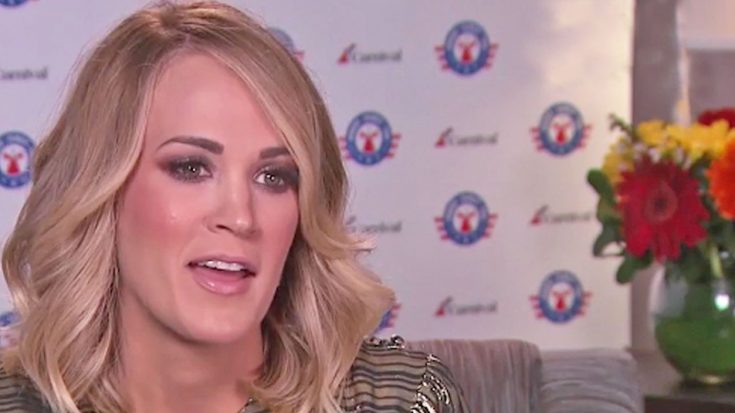 Just a few days before her son turned 2-years-old, Carrie Underwood revealed that she was going to take a break from her day job.

“We just wrapped up the Storyteller Tour and I feel like my life right now, creatively, is kind of a blank space,” she told PEOPLE. “I’m really excited about that, because you don’t know where you’re going to go. I’m nervous because I want whatever I do next to be amazing, so I’m kind of taking a little break right now and being a mom and being a wife and going to see some hockey games to see my husband play. I’m kind of waiting for lightning to strike and go, ‘Okay, it’s time to get creative and work on new music!’”

Many fans have speculated that since she wass officially on a break from making music and touring, she would focus on growing her family. Entertainment Tonight had the same thought, so when they sat down with her on Tuesday (April 4), they asked her if she and husband, hockey star Mike Fisher, are ready for Baby No. 2.

“You know, we’re on God’s good timing or whatever you might call it,” she told ET. “I’m just trying to figure out where life’s going to take me next.”

When asked if her son, Isaiah, asks for a little brother or sister, Underwood responded very quickly saying, “Oh no. As a matter of fact, if a dog climbs up on my lap, I feel like he gets a little jealous!”

Well, whenever the time comes to grow the Fisher family, little Isaiah will have to get used to the idea of sharing his parents with his sibling! Since then, they’ve remained a very happy family of three. Check out their latest vacation adventures below.

Napa Valley, you are my happy place! Amazing wine, beautiful scenery, wonderful friends, new places and a yummy dinner created by @chefchiarello and his apprentice, Isaiah Fisher! And that was just the first day here! Life is good…❤️❤️❤️ #napavalley #winetime #happy #IMarriedUp (And, thanks, @hunterpremo for letting me borrow your jacket!)

Watch her interview below.

Carrie Underwood reveals whether she's ready to have more kids!