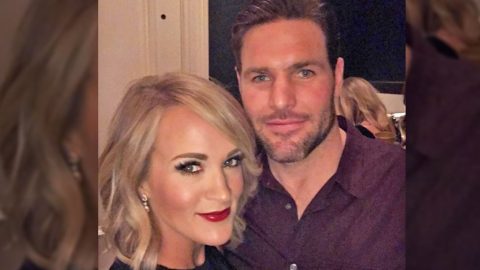 Monday (June 5) was a big day for Carrie Underwood‘s husband, Mike Fisher. Not only did Fisher lead the Nashville Predators to victory in their pursuit of the coveted Stanley Cup, but the history-making game coincided with Fisher’s 37th birthday.

It may have been Fisher’s big day, but the event was overshadowed by his participation in the Stanley Cup finals. In an effort to stay focused on the task at hand, Fisher and his family chose not to officially celebrate his birthday. In fact, Carrie didn’t even buy her husband a gift.

“We kind of put the birthday in the back room,” she said during a mid-game interview. “Shut the door and we’ll visit it later.”

Although Carrie didn’t get her hubby a gift, she promised that she would make up for it after his NHL season is over.

“I’m terrible I know,” she said, “I will, though. I will. After all this is done, and we have the [Stanley] Cup maybe that could just be his birthday party.”

Prior to tip off Monday night, Underwood took to Instagram to wish Fisher a happy birthday, saying, “Happy birthday to this handsome hunk! I’ll never forget the day he told me he was asked to wear the “C.” I was so proud on that day and I’m even more proud now to see him play in the #StanleyCupFinals. He’s definitely the only FISH in the “C” for me!”

Happy birthday to this handsome hunk! I'll never forget the day he told me he was asked to wear the "C." I was so proud on that day and I'm even more proud now to see him play in the #StanleyCupFinals He's definitely the only FISH in the "C" for me! ????????

Just one day prior, Underwood penned a touching note about her husband and shared it with the world.

“I love this man more than words can express. I am beyond proud of him…he is an amazing man of God. He loves his family, his friends and his job,” Underwood wrote. “He deserves nothing but he best in this world, because he gives nothing but his best to it! I am amazed every single day at the kind of human he is! I love you, baby!”

Mike Fisher and the Preds now head to Pittsburgh where they will face the Penguins in Game 5 on Thursday night (June 8).