By Jennifer Pernicano on November 3, 2016
Advertisement 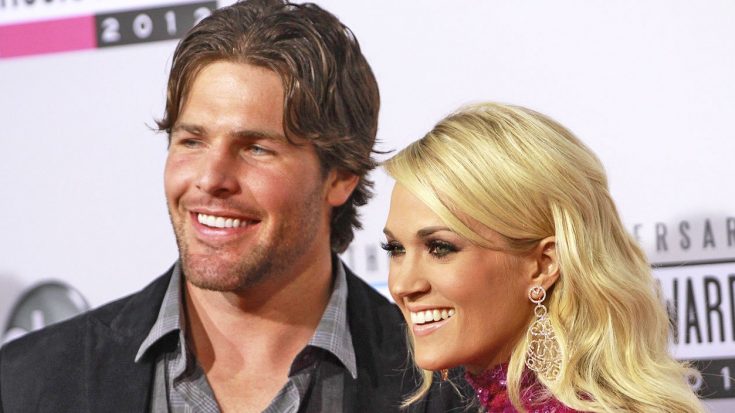 Carrie Underwood walked the red carpet alone at the 50th Annual CMA Awards on Wednesday night (Nov. 2). Questions were raised as to where her husband, Mike Fisher, was. Fans know how supportive they are of each other, so it seemed odd that he wasn’t in attendance.

He is the captain of the NHL team, the Nashville Predators, and turns out he was on the road for a game in Arizona.  We’re sure he was watching the show after the skate around because his beautiful wife had a huge role in the show.

Not only did she serve as the co-host, for the ninth time, she performed her latest single, “Dirty Laundry”, was part of the opening act and sang during the tribute to Dolly Parton. She was also up for Entertainer of the Year, Female Vocalist of the Year, and Musical Event of the Year.

Miranda Lambert had won Female Vocalist of the year for the past six years and lots of people thought she was a shoo-in. When Underwood’s name was read as the winner of that category, she was more surprised than anyone!

“Glory to God. Thank you Jesus! Mike, I love you. Isaiah, you are my heart,” she said when she accepted the award. Overwhelmed with emotion, she lost track of what she wanted to say and ended up saying, “I’ve just become suddenly stupid…I just love you all … I don’t know what else to say.”

Fisher, who was watching from Arizona, congratulated his wife on social media with a sweet Instagram post.

“Very proud of you, [Carrie], for winning female vocalist of the year,” he wrote. “Wish I could be there to celebrate! God has given you an incredible gift and you continue to inspire me by the way you use it for Him. Love you!”

Very proud of you @carrieunderwood for winning female vocalist of the year. Wish I could be there to celebrate! God has given you an incredible gift and you continue to inspire me by the way you use it for Him. Love you! #cmaawards #glorytoGod #proudhubby

Watch her perform “Dirty Laundry” below.