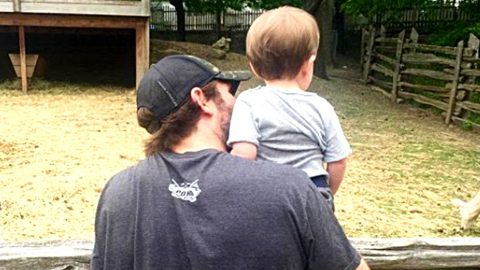 Since he decided to come out of retirement and rejoin the Nashville Predators, Mike Fisher doesn’t have as much free time as he’s used to. So whenever he does find a spare day, he takes full advantage of it.

Recently, Mike used his day off to have some father-son bonding time with his son, Isaiah.

The three-year-old frequently appears in photos and videos on his parents’ social media accounts. Back in January, Carrie Underwood shared a priceless video of Mike reading a story about Noah to their little boy.

If you thought that video of Mike and Isaiah was adorable, just wait until you see the brand-new photo Mike shared of the two of them.

Since he had a free day, Mike felt it was the perfect opportunity to take Isaiah out fishing. (Which is funny, you know, since their last name is “Fisher”).

Of course, Mike had to take a photo to remember their outing, especially since Isaiah caught a fish! “Little man got this one with his first cast today and reeled it in himself,” Mike wrote in the caption to the photo.

It’s clear from his caption and his big grin in the photo that Mike was one proud papa. But the best part of the photo was Isaiah’s cheesy smile, which was as cute as could be.

Seriously y’all, how precious is this?

Day off= fishing with Izzy! Little man got this one with his first cast today and reeled it in himself. #prouddad

You can see more priceless photos of Isaiah in Carrie’s music video for “What I Never Knew I Always Wanted.” The video features a whole bunch of Fisher family photos, some of which had never been seen before Carrie shared them in the video.

From the looks of it, Carrie and Mike may have a lot more fishing photos to share of Isaiah in the future. He’s already a pro!