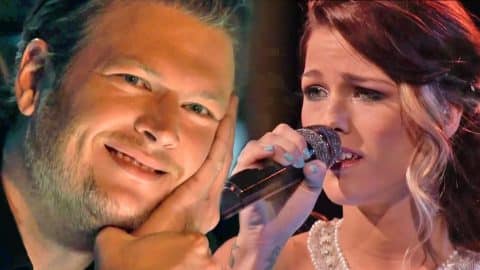 No one can sing the emotional song “Over You” like Miranda Lambert, but Team Blake’s Cassadee Pope really gave her a run for her money during the third season The Voice. It’s obvious how much Blake Shelton is enjoying Pope’s rendition of Lambert’s song, especially towards the end of her performance when his expression shows pure awe.

“Over You” was released in 2012 on Miranda Lambert’s Four The Record album. The song was a mega-hit for Lambert, reaching #1 on the US Hot Country Songs (Billboard) chart. Written by both Lambert and Shelton, the song is highly emotional and is actually based on a very sad time in Shelton’s life. The ballad pertains to the loss of Blake’s older brother, who died in a car accident when Shelton was a teenager. According to CMT.com, “Blake said he couldn’t record it for himself or sing it onstage every night, but he would be honored for me too,” Miranda said about the heartbreaking tune. Shelton and Lambert won Song Of The Year at the CMA Awards for this song, causing Miranda to break down in tears, too overcome with emotion to even give an acceptance speech.

Cassadee Pope performed “Over You” in the third round competition on The Voice, choosing said song to honor her grandfather that had passed away years earlier. Her performance is absolutely breathtaking; she wears her heart on her sleeve, bringing out all the emotions the song makes her feel with her phenomenal vocal range.

Do you remember this performance? What did you think about it at the time?