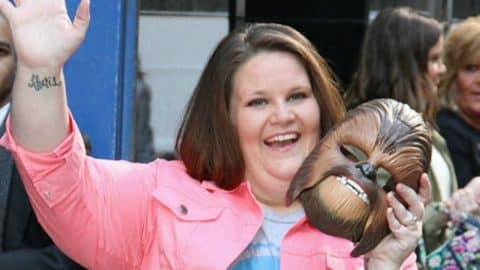 It’s been nearly two months since Candace Payne broke Facebook records with her viral Chewbacca mask video. With more than 150 million views to date, Payne’s hysterical live reaction to a spur-of-the-moment Chewbacca mask purchase holds the record for the most views ever using Facebook live.

Now the 37-year-old Payne aka Chewbacca Mom is back and is showing the world a new side. On Saturday (July 9), Payne took to Facebook live to share her heart and her voice after Thursday night’s shootings in Dallas which left five police officers dead and seven wounded.

“I am thousands of miles, hundreds of miles away from really identifying with every single ounce of pain that I know is being felt by the whole world right now,” she said in her latest video. “I’ve been spreading joy and I’ve been hoping to do that, but I found myself over the last couple days being silent because I’ve been so sad and so hurt by what’s going on.”

Payne, accompanying herself on piano, performed her rendition of Michael Jackson’s “Heal the World.” At press time the video has been viewed nearly 750,000 times.

“Heal the World” was originally released in 1991 for Jackson’s album, Dangerous.