By Miranda Raye on April 17, 2018
Advertisement 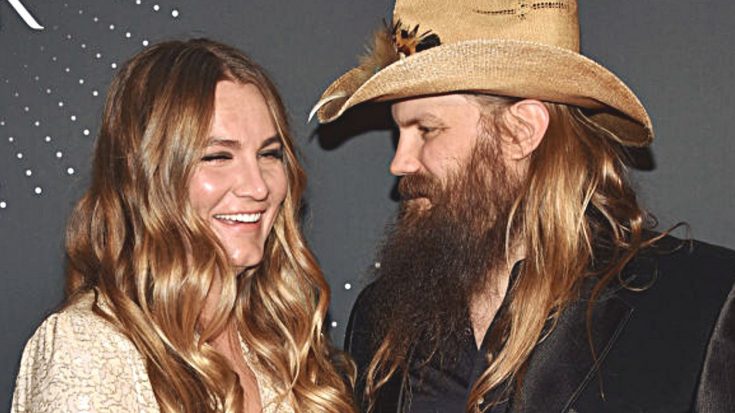 Chris Big Winner For More Reasons Than One

Sunday (April 15) was a huge day for Chris Stapleton. For starters, it was his 40th birthday!

His day got even better when he ended up winning two ACM Awards. The first was for Album of the Year for From a Room: Volume 1, and the second was for Male Vocalist of the Year.

However, Chris wasn’t there to accept either of his awards. That’s because his wife, Morgane, was expecting twins and was due at any time.

Chris’ absence is something that host Reba McEntire acknowledged early on in the ceremony. She even made a joke about the twins’ impending arrival, saying that if Chris won Entertainer of the Year the twins could win New Vocal Duo of the Year.

Later on, when Sugarland announced that Chris won the Album of the Year Award, McEntire took to the stage to share some happy news. As she revealed, the twins had decided to arrive a little bit early, and were born on that same day!

The crowd roared when Reba made the birth announcement, clearly thrilled for Chris and Morgane. She also revealed that the babies are both boys!

Chris and Morgane already have a son and a daughter, whose names they have chosen not to share publicly. Now that they have twin boys, daughter and mother are outnumbered!

Fans anxiously waited to hear an update from Chris or Morgane, but one never came on Sunday, or Monday either.

Finally, on Tuesday (April 17) Chris broke his silence to share how Morgane and the twins are doing. “Morgane & the boys are doing great & we appreciate everyone’s support!” he wrote.

Chris also took time to thank Reba for sharing their happy news at the ACM Awards. “We couldn’t have dreamed up a better day,” he said.

Thank you for sharing our good news @Reba! We couldn’t have dreamed up a better day. Morgane & the boys are doing great & we appreciate everyone’s support! https://t.co/Qt9tzx3DIA

A birthday, two ACM wins, and celebrating the recent birth of twins all in the same day? It seems safe to say that April 15, 2018 is a day that Chris will never forget!

You can catch the clip below to watch Reba announce the Stapleton twins’ birth at the ACM Awards!

Since this story was written, Morgane took to Instagram to share a message of her own. And in a surprise move, she also shared a photo of the twins.

It’s a big deal that Morgane was willing to share a photo of her baby boys, since she and Chris have been extremely cautious about sharing anything pertaining to their two oldest children.

Enjoy the photo of the twins below!

Thank you for all the love! We’re so grateful to finally be home with our sweet family. We would like to say a special thank you to all the incredible nurses & doctors at Centennial Women’s & Children’s Hospital in Nashville. At more than a month early, we had a week long stay in the nicu & the incredible people there kept our boys healthy & happy. Words cannot express our gratitude for you all & what you did for our family. From the bottom of our hearts, thank you! ♥️♥️

Congratulations to @ChrisStapleton who has won Album of the Year and just welcomed TWINS! #ACMawards pic.twitter.com/nAsBACSuEo