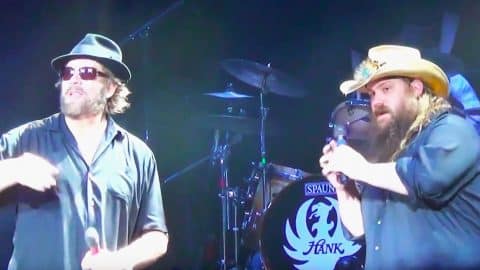 Out of Hank Williams Jr.‘s extensive catalog of hit songs, one of the most recognizable is his 1979 release, “Family Tradition.” The song has become a country music staple, and any time a country fan hears it they can’t help but sing at the top of their lungs.

That’s what one crowd was doing on August 12 in Texas, only they weren’t listening to a recording of Hank, but the real deal. Hank performed the song as his finale, and the crowd couldn’t get enough.

As always, Hank’s performance was high-energy and filled with plenty of that outlaw attitude that we love him for. But there was something extra special about this rendition of “Family Tradition” that sent it into overdrive.

That summer, Hank teamed up with Chris Stapleton to co-headline a short tour. Although Chris had experienced great success as a songwriter for years, his singing career gained traction after the 2015 CMA Awards. His popularity led to him being able to join Hank on tour.

Hank had Chris out on stage with him during his finale, along with Chris’ wife, Morgane. While Hank led most of the performance, Chris took over on a couple of the verses and sang each one with his signature soulful style.

Does it really get any better than this? We don’t think so! Check out Hank and Chris’ rowdy performance of “Family Tradition” in the video below.