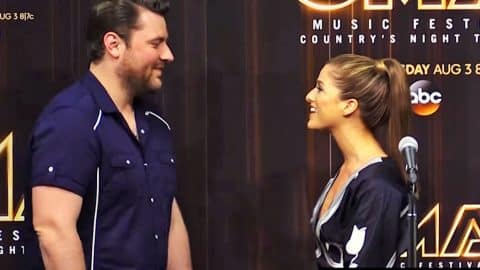 The man known for his ultra-smooth and deep voice surprised his close friend and colleague with something she never saw coming.

Chris Young has been one of the leading male country artists since his debut on singing competition, Nashville Star, but when he decided to pair up with fellow country singer (and ‘Voice’ champ) Cassadee Pope, things only got better!

During the 2016 CMA Fest press conference Pope was participating in, Young sat in the front row with his present in hand. It was something incredibly precious and made of gold.

Many have confused these two for a couple in real life, but the truth is the “Think of You” singing partners are simply close friends.

So, what was it that he was holding?

Well, following the debut of their hit duet in January 2016, the song soared to new heights on the charts and nailed the No. 1 spot on Billboard’s U.S. Country Airplay chart just a few short months later. With success like that, the track sold like wildfire.

In Young’s hands was a large plaque and a record of their duet sitting above the single’s artwork. The record was adorned in gold – signifying that the single had sold hundreds of thousands of copies!

When Pope saw the front of the record she was shocked and speechless followed by an incredible amount of excitement!

What an amazing surprise! These two are definitely a force to be reckoned with in the country community and we can’t wait to hear another duet by them (fingers crossed)!

Watch this truly special moment between these two in the video below!