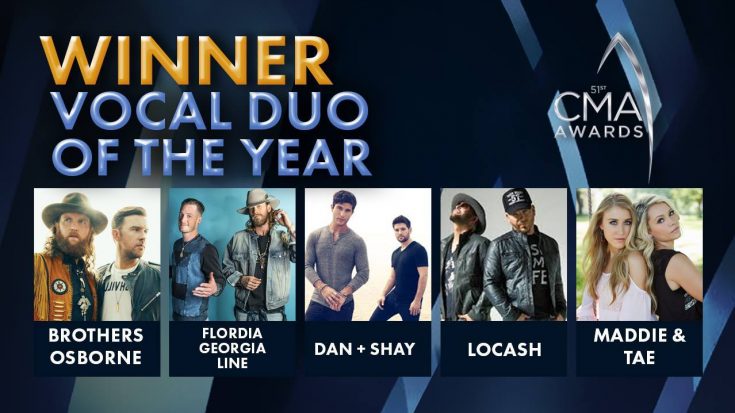 Every year, the competition gets hotter and hotter for the highly coveted CMA Award  for Vocal Duo of the Year – and that same sentiment holds true for this most recent announcement!

During the 2017 CMA Awards, five separate duos were nominated for the award, but only one could take it home and when the presenters opened up that envelope – jaws dropped all over the arena!

Maddie & Tae, LOCASH, Florida Georgia Line, Dan + Shay, and Brothers Osborne all received nominations for the award from their stellar accomplishments in 2017 – however only one could be handed this incredible award.

Taking home the high honor for a second time this evening, Brothers Osborne were named the winner of this coveted award and are now crowned as the CMA’s Vocal Duo of the Year for 2017!

They have truly brought incredible music to the world and have earned their own spot as one of country’s most-popular pairings with the release of hits like “21 Summer,” “Ain’t My Fault,” and “Stay a Little Longer.”

Watch the video below for their song that also earned them the award for Video of the Year!