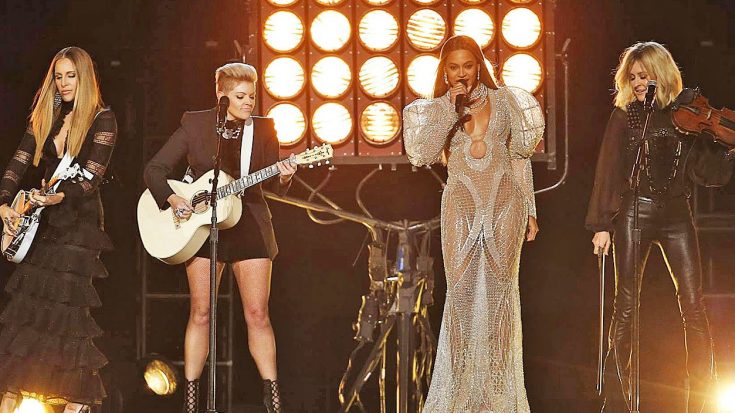 There were many performances that took place on the CMA Awards on Wednesday night (November 2). However, while most of those performances have now faded from the minds of those who tuned in to the awards, one still has people buzzing.

On the day of the CMAs, news broke that R&B artist and pop star Beyoncé would be performing on the show alongside the Dixie Chicks. Country fans immediately expressed their outrage on social media after they had been promised there would be no cross-genre collaborations at this year’s awards.

Early on Thursday (November 3), some of Beyoncé‘s fans noticed that the CMA had pulled some content pertaining to her performance off of its social media pages and official website. As a result, the CMA was criticized for its decision.

Later that day, the CMA issued an official statement in response to the criticism. The CMA praised Beyoncé and the Dixie Chicks in the statement, writing:

“CMA has not erased any mentions of Beyoncé’s performance on the CMA Awards. In advance of the broadcast, CMA removed a five-second promotional clip from ABC.com and CMA’s Facebook page. The promo was unapproved and CMA removed it prior to the broadcast. Beyoncé’s performance with Dixie Chicks was a highlight of the evening and we are continuing to share the amazing full-length performance clip via our official social channels.”

Chief Executive of the CMA, Sarah Trahern, elaborated on the statement in an interview. She further explained that the reason the CMA pulled the initial promotional clip is because Beyoncé requested for it to be taken down.

“Beyoncé’s team hadn’t approved that, so we pulled it down,” Trahern said. “Fans can get kind of passionate and read other things into it.” She added that Beyoncé also provided her own photographer and her team only approved one live video, hence the reason why the CMA has not shared much material about her performance.

What do you think of the CMAs’ statement? Share your thoughts in the comments.