By Manly Bryant on March 19, 2018
Advertisement 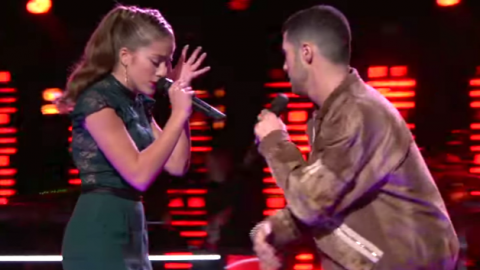 While the Blind Auditions may have come to an end, this season of The Voice is just getting started!

14-year-old Brynn Cartelli and 21-year-old Dylan Hartigan of Team Kelly faced off in the first Battle Round of Season 14 with a country-rock take on Taylor Swift‘s “…Ready for It?”

Throughout the battle, Clarkson’s fellow coaches were seen visibly impressed by the talent that had taken the stage. While it’s unclear who won the battle, we’re sure the “Love So Soft” singer will have a hard time deciding who to take into the next round.

“…Ready for It?” was released as the second single off Swift’s sixth album, reputation. The song was in international success, hitting the Top 10 in the United States, United Kingdom, Hungary, Canada, Malaysia, New Zealand, Australia, and Scotland.

You can watch the epic Voice battle below.