Country Artists Snubbed From All Major Categories In 2018 Grammy Nominations 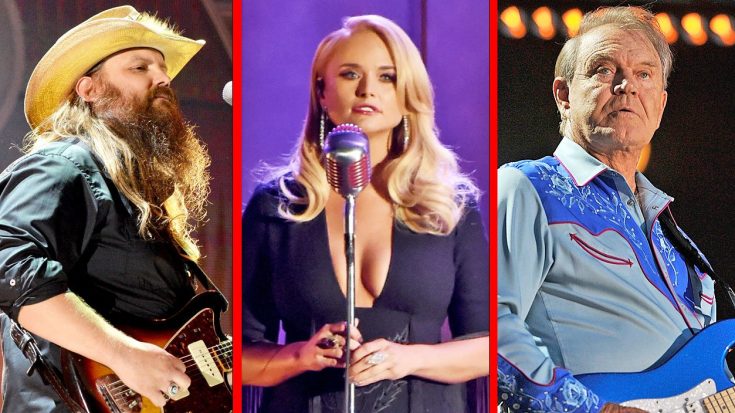 When it comes to the music industry, a Grammy Award is the highest honor an artist can receive. In fact, even a nomination on its own carries a great deal of weight, since the artist can forever call themselves a “Grammy nominee.”

After much anticipation, the nominees for the 2018 Grammy Awards were announced on Tuesday morning (November 28). Soul singer Andra Day revealed the nominees in the four main categories during an appearance on CBS This Morning.

At the Grammys, there are awards given out that are specifically attached to a certain genre, such as country or rock. Then, there are four “general field” categories, which are typically regarded as the most prestigious awards to receive.

Any artist can be nominated for a general field award, regardless of genre. The four awards are as follows: Record of the Year, Album of the Year, Song of the Year, and Best New Artist.

Country fans who tuned in to watch the nominee announcement were likely shocked by what they heard. Surprisingly, there wasn’t a single country artist, album, or song nominated in any of the four general categories.

This seems like quite the snub, since country artists typically earn at least one or two nominations in these categories. For example, for the 2017 Grammys Sturgill Simpson‘s A Sailor’s Guide to Earth was nominated for Album of the Year, and Kelsea Ballerini and Maren Morris were both nominated in the New Artist of the Year category.

There were some noticeable omissions in the country-specific categories as well. One extreme surprise was the fact that Miranda Lambert‘s critically acclaimed and ACM award-winning album The Weight of These Wings was not nominated in the Best Country Album category.

Go ahead and take a look at the nominees in the country categories below, and let us know if you think anyone else was snubbed:

As you can see, Chris Stapleton leads the pack with a total of three nominations.

Congratulations to all of the nominees!