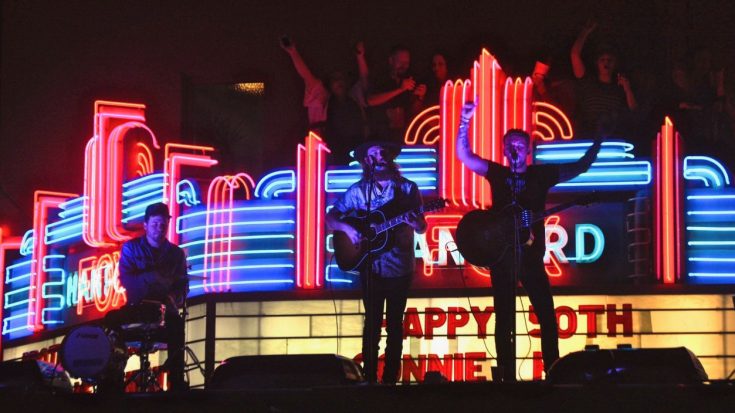 What is an artist to do when a crumbling venue forces a concert to be canceled? For Brothers Osborne there as only one option….move the concert to the roof of their tour bus.

For the second time in two weeks, Brothers Osborne have had to deal with a venue’s ceiling collapse. During their November 27th stop on their Dirt Rich Tour at the Egyptian Theatre in Boise, Idaho, their concert was cut short when chunks of the roof began falling on stage. A similar event occurred Saturday prior to the duo’s concert at the Hanford Fox Theatre in Hanford, California.

HANFORD! Ceiling caved in (again). Show in venue is canceled. Be at our bus in 20 minutes. pic.twitter.com/XLjbGdP1Za

But, rather than allowing the concert to be called off, Brothers Osborne did some quick thinking and set up a stage on the roof of their tour bus that was parked directly in front of the theater.

For 30 minutes, the CMA Vocal Duo of the Year performed in the rain while broadcasting the event via Facebook Live. The result was something that the men called “One of the most memorable moments of our lives.”

For the 2nd time in 2 weeks the ceiling caved in so we moved the party to the top of the bus. One of the most memorable moments of our lives pic.twitter.com/EmoPtFmp6o

Now that’s what we call dedication! Check out the full bus-top performance from Brothers Osborne in the video below.