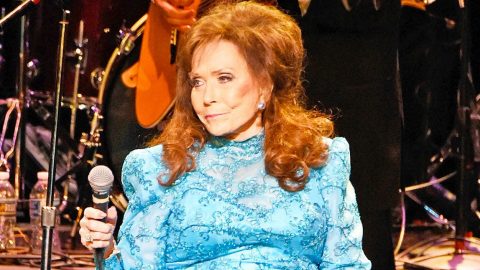 Less than a year after being hospitalized due to a stroke, it has been revealed that Loretta Lynn has suffered another health scare.

In May 2017, Lynn had a debilitating stroke and she recovered for several months in a rehabilitation center, where family members assured fans she was improving every day. She did not make a public appearance until the first weekend of October when she hosted the Tennessee Motorcycles and Music Revival event at her ranch. She performed “Coal Miner’s Daughter” while sitting in a chair surrounded by family.

She later made a surprise appearance on October 22, 2017 to help induct Alan Jackson into the Country Music Hall of Fame. Since then, we haven’t really seen much of the legendary singer, perhaps because she is still recovering from her stroke in May.

On Monday (Jan. 8), her sister, country singer Crystal Gayle, revealed in a Facebook post that Lynn, 85, had fallen down and as a result, broke her hip. Gayle, whose birthday is Tuesday (Jan. 9) asked her fans for one thing for her birthday.

“My birthday wish is for everyone to send love and prayers to my sister, Loretta Lynn, who fell and broke her hip last week,” Gayle wrote. “I was with Loretta yesterday. She is in good spirits as well as can be expected with this type of injury.”

Loretta herself hasn’t posted anything about the fall or her injury on her social media pages or website. We are sending our prayers to Loretta Lynn for a speedy recovery!