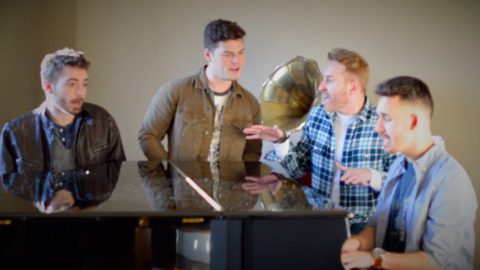 When one looks at Nashville, the city and it’s biggest industry (country music) seem complete. But, if you take a closer look you’ll realize that two things are missing: A 4th and main street intersection and a modern all-male quartet.

Grammy Award nominated producer Wayne Haun took notice of the void and decided to do something about it. Haun, along with soloist Chase McDaniel, had a vision to bring old-fashioned four part harmonies back to country music and launched a plan to create a new all-male quartet.

Haun and McDaniel immediately set the plan into action, starting with a phone call to Texas-based tenor singer Randy Austin. McDaniel and Austin had met years earlier at a songwriting workshop, and Chase knew that Randy had to be a part of this journey.

Within two weeks, bass singer Blake Whitlock from Kentucky was on board. All that was missing was the fourth part. With the help of a mutual friend, Michigan native Chris Chavez was introduced to the group and the vocal chemistry was immediate.

“I didn’t know Chris before the first night we sang together, I couldn’t imagine it being anyone else,” Chase recalled of the group’s first official meeting. “It feels like we’ve known each other for years.”

Four men from four different states and four different backgrounds with one common dream. It can only be called providential. Chase, Randy, Blake and Chris all grew up singing in church and learned four part harmony early on. A mutual love for those who paved the way for country music quartets also brought the men together.

“I’ve always been a huge fan of the Oak Ridge Boys,” said Blake. “I dreamed of singing bass at the same level as Richard Sterban.”

Whitlock adds, “I would like us to….share a stage with The Oak Ridge Boys and one day be compared to them as one of the greatest quartets in history.”

So what’s the story behind the group’s unique name?

“We liked the imagery of a new intersection since we’re merging the production of ‘new country’ with vocals and song stylings of ‘classic country,'” explains Chavez.

“The interesting thing is that Nashville doesn’t have an actual 4th and Main Street crossroads,” adds Randy Austin. “Until now…”

The group recently debuted their first ever music video, a flawless cover of Keith Whitley’s “When You Say Nothing At All.” The near-viral response from new fans boosted the confidence of 4th and Main and proved that they are, in fact, onto something special.

The guys went back to the studio to record a new cover tune just in time for Valentine’s Day. With Chris Chavez on lead, 4th and Main puts a quartet spin on Keith Urban’s “Somebody Like You.” If the spot-on harmonies are any indication of what’s to come for this new group, we can expect to see a lot more from these guys in the years to come.

Check out 4th and Main singing “Somebody Like You” in the video below! Connect with 4th and Main‘s by following their Facebook fan page here. You can also see their first cover video by clicking here.