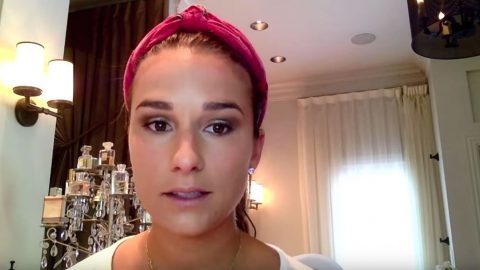 After vicious people on social media started tearing her apart, she decided to take a stand against it all.

Just a day after it was announced that her husband suffered a torn rotator cuff and would be suspended from his position on the Jets, Jessie James Decker found herself the subject of a ruthless twitter troll’s antics – but she wasn’t going to sit by and just take it.

User Kelcy Roberts wrote a tweet responding to something that since has been hidden, but referred to Decker in a malicious way.

Decker decided to write back in a way most fitting of her character and said that she was going to pray for her.

“Why are u even tweeting me? Does it make u feel good to be mean to me and try and hurt my feelings? Did u get a thrill in that message? Did it make u feel special and cool? Did u smile and feel like a bad ass?” She wrote back to Roberts. “Try to be a nice girl. I promise it will make U feel better than trying to be hurtful…”

Her followers rallied in support of her suggestion to be nicer to people rather than put them down or attack them, with Decker adding that she’s “gotta just pray for those who are struggling with unhappiness.”

Decker has lead a successful career in country music since she burst onto the scene in 2009, and has been working incredibly hard to grow her music and audience following that.

Her latest single, “Lights Down Low” landed in the Top 40 on Billboard’s US Country chart and has sold thousands of copies, and her music has been viewed more than 650,000 times!

Watch the video below and let us know what you think of the Twitter situation!