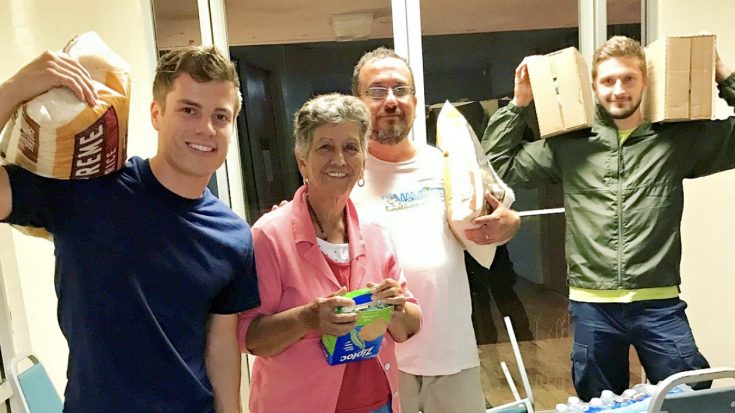 Country newcomer Lawson Bates, one of the stars of Up TV’s Bringing Up Bates, is known not only for his beautiful voice, but for his heart of gold and willingness to rush to the aid of those in need.

25-year old Bates recently returned from a trip to Puerto Rico where he helped bring much needed relief to the island that was nearly wiped out by Hurricane Maria in September. Bates, along with his brother Nathan and some friends, traveled by private plane to the island after hearing about a family that needed to get out immediately.

“Some folks had reached out to us that were very desperate and said, ‘Can you please help get this family out? They’re sick and there’s no water.’ It was just a terrible situation,” Lawson told Country Rebel. The Bates brothers and their team arrived in Puerto Rico shortly thereafter and were able to get the family out.

“When disasters happen we work around our schedules to get there and make a difference right when its happening as much as possible,” said the ‘Past the Past’ singer. “This was one of those situations where the needs were huge.”

While there, the team also helped multiple organizations, including Samaritan’s Purse, distribute supplies.

“A lot of supplies were at the main airport, but the problem was distribution. They couldn’t get the supplies into the mountains. Even if they could they didn’t have enough people to do it,” Bates said. “There were families we found in the mountains that said we were the first people who had brought them anything, any food or water.”

Because of their access to a small plane and the fact that Nathan Bates is a pilot, the team was able to fly into smaller airports that large planes couldn’t get into. This allowed Bates and his group to get supplies to hard to reach areas.

“Every single road, power line, house or building was affected in some way. They may not have been completely destroyed, but roofs were mission, windows were blown out…it was this way from one side of the island to the other.”

Meet Yuvan, & a few of my new pals!! I just got back from Puerto Rico where we’ve spent the past week bringing food, water, and necessities to remote villages. The devastation from Maria is simply astronomical… Today I’m praying for all the volunteers doing their best to make a difference, and especially for the people who are still desperately waiting for that help to get to them… Keep praying for Puerto Rico ??

This isn’t the first time that Lawson has seen first-hand the devastating affects of natural disasters and poverty. Earlier this year he traveled to Houston where he helped with hurricane relief efforts. He’s also taken trips to the Philippines, Haiti, El Salvador, Guatamala, Honduras, and more.

Samaritan’s Purse, a disaster and crisis response organization, is dear to Lawson’s heart. He has worked with them as a volunteer on numerous occasions and released a single, “I Thought I Had Problems,” in 2015, donating all proceeds from the song to the organization.

The 3.5 million people in Puerto Rico have months, possibly years, of rebuilding ahead of them. There’s little power, and in many places, there’s still no water to drink or bathe in or to flush toilets. There’s limited food and cell service, and dozens of remote villages have been completely cut off from everything for weeks.

It’s important to Lawson that people don’t forget about Puerto Rico. “My main goal is keeping people aware of the needs. The news cycle is a 24-hour cycle. Tomorrow there will be more tragedies that will cover up what’s going on in Puerto Rico. They still need our help.”

Watch “Past the Past,” Lawson Bates’ latest music video, below.