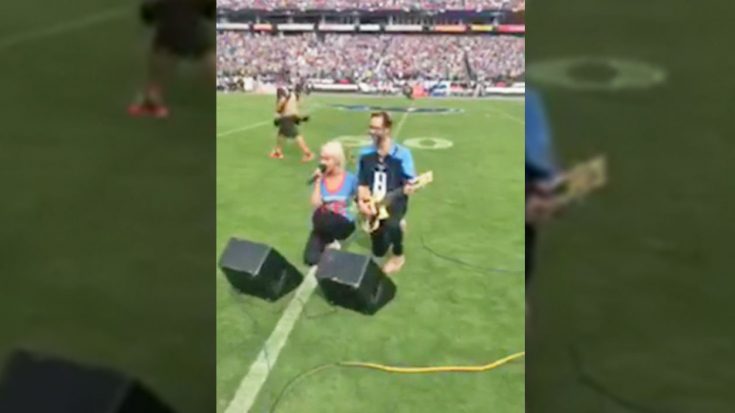 Over the weekend, countless NFL teams took part in the ongoing protest of the National Anthem.

Several NFL players continued to kneel during the National Anthem, while many stood arm in arm with each other on the sideline. Some teams didn’t even take the field before the game until the singing of “The Star-Spangled Banner” was over.

Two of those teams to choose to stay in the locker room were the Tennessee Titans and the Seattle Seahawks, who played each other on Sunday (Sept. 24) afternoon.

A statement from the Titans regarding their actions read,“As a team, we wanted to be unified in our actions today. The players jointly decided this was the best course of action. Our commitment to the military and our community is resolute and the absence of our team for the national anthem shouldn’t be misconstrued as unpatriotic.”

Country singer and runner up of Season 8 of The Voice, Meghan Linsey, had the honor of performing the National Anthem, but made headlines when she and her guitar player took a knee while she sang the final note.

“I was absolutely terrified walking out there,” Linsey said, according to Yahoo. “I knew what I was getting ready to do, and I understood what it meant. Obviously, I made a name for myself in country music, and I knew what the backlash would be. So I walked out there scared. But I have to go into my gut and my heart, and I knew that was the right thing to do today.”

Although she made the decision to take a knee prior to her performance, Linsey had no clue both teams were going to stay in their locker rooms.

“That made it a little more scarier, I guess, that nobody was out there doing it with me,” she continued. “And I hadn’t planned for this. But it was obviously just meant to be that I was there in this moment, and given this opportunity.”

“I couldn’t have gone out there and not done anything and felt good about it, because I have always built this platform on empowerment and loving people — whatever color, whatever sexual orientation. And it was like: Of all the days that I would sing the anthem! It put me in a weird spot. You’re making a choice when you walk out there, however you handle it. If you don’t take a knee, it’s like: what do you stand for? For me, anything else wasn’t an option,” she said.

What do you think of her stance? Let us know in the comments. Make sure to watch her performance below.