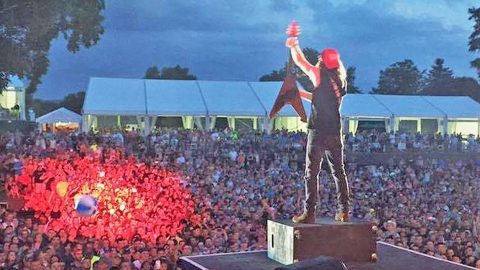 Congratulations are in order for country star Jaren Johnston and his wife, Evyn!

Johnston was performing with his band, The Cadillac Three, on Thursday (Oct. 13), when he stopped their set to make a huge announcement.

The Cadillac Three were opening for Florida Georgia Line in front of a sold out crowd at Nashville’s Bridgestone Arena.

“Evyn and I have been together for 15 years,” Jaren told the crowd, according to One Country. “We’ve been through so much together but nothing has ever been as exciting as expecting our first baby. We can’t wait to meet this little bad ass in April!”

The Cadillac Three followed up the announcement with a performance of their song “White Lightning”, which he wrote about his wife of three years.

Johnston confirmed the pregnancy on his Instagram Friday (Oct. 14).

Congratulations to Jaren and Evyn! Watch The Cadillac Three perform the song below.