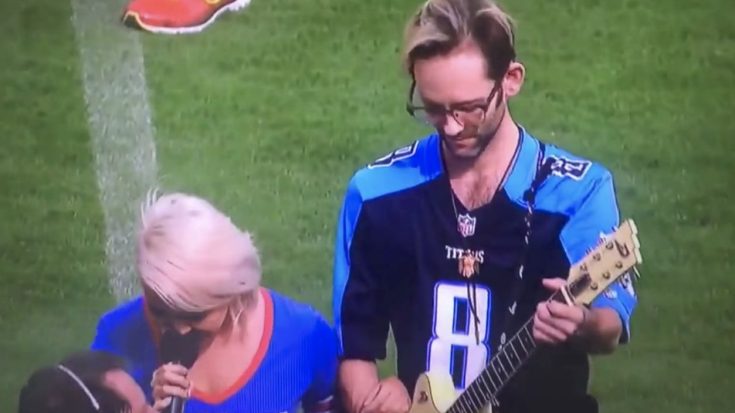 Just days after President Donald Trump called for NFL players to be fired for protesting the national anthem, numerous teams and players opted to act out against the statement prior to kick off of their respective games. Now one country singer has found herself in the middle of the political battle after she took a knee following her performance of the national anthem at one of Sunday’s games.

The Tennessee Titans and Seattle Seahawks faced off at Nashville’s Nissan Stadium Sunday (September 24), but not before the national anthem controversy got its share of attention. Both NFL teams opted to stay in the locker room during the anthem performance.

A statement from the Titans regarding the protest read:

“As a team, we wanted to be unified in our actions today. The players jointly decided this was the best course of action. Our commitment to the military and our community is resolute and the absence of our team for the national anthem shouldn’t be misconstrued as unpatriotic.”

The Seahawks also issued a statement.

Country singer and Voice runner-up Meghan Linsey had the honor of singing the national anthem prior to kick-off of the Titans vs. Seahawks game. Accompanied by a guitar, Linsey delivered a flawless and emotional rendition of “The Star-Spangled Banner.” Immediately upon finishing the song, both Linsey and her guitarist took a knee on the player-less field.

Linsey’s bold move elicited mixed reactions across social media. Check out Meghan Linsey’s performance in the video below and let us know what you think.