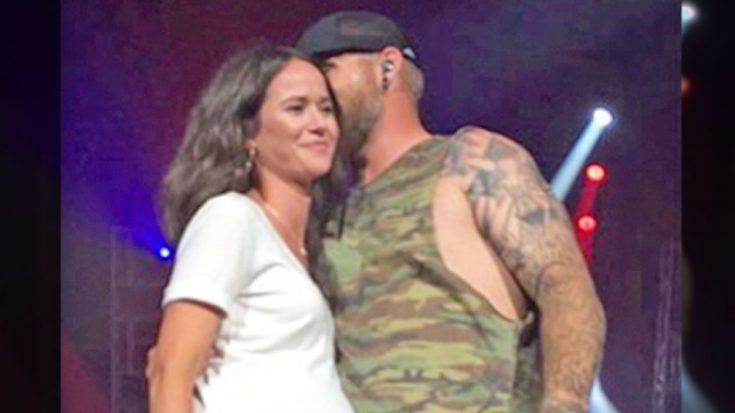 “Honestly, I’m just speechless,” Gilbert tells PEOPLE. “Watching the delivery, I don’t even know what to say. Amber and I are just so thankful and blessed to have this beautiful little boy.”

According to the proud dad, baby Barrett wasn’t due to until the 17th but arrived quickly after Amber went into labor. “It was really fast. Amber woke up, had a little pain. And the nurse said, ‘You’re ready.’ It was 30 minutes, and we had Barrett. And I have no words, beyond it’s even more than I could’ve ever imagined.”

The inspiration for Barrett’s name came from the couple’s list of favorites and the hyphenated middle name honored both sides of the family.

“Barrett’s a name we’d had for a very, very long time,” Gilbert explained. “We knew we wanted to have a ‘B’ name, and [Barrett’s] something we’ve always had and loved.”

The middle name comes from Amber’s father’s side (Hardy), while Clay was the country star’s PaPaw’s middle name.

The couple revealed they were expecting in May after dealing with fertility issues for two years after their marriage.

“We’d been to see a fertility specialist, and two different folks that told me it would be close to a miracle if it happened without IVF,” Gilbert said at the time. “I’m not much of a quitter, but I was really, really frustrated.”

After finding out they were expecting, Gilbert shared that they were very much in shock because they had been told “it was just not in the cards.”

“I think I stared at it for at least two minutes without saying anything because I was literally in shock,” Brantley said of the moment his wife showed him the positive pregnancy test. “I’m staring at this answer to many, many, many prayers.”

Congratulations to Brantley and Amber! See photos of their little bundle of joy by clicking here.