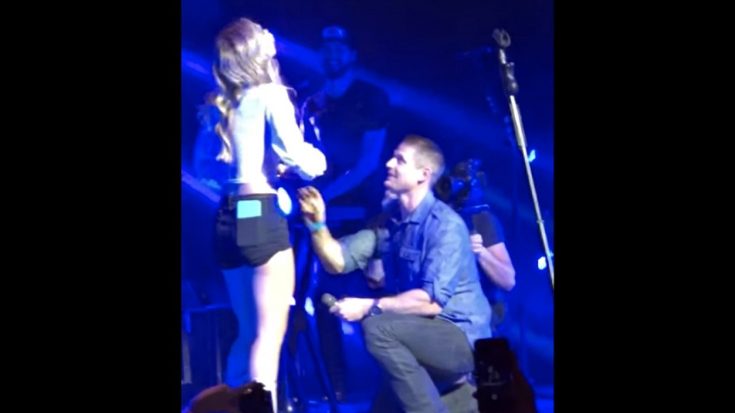 Country concert gender reveals and marriage proposals seem to be all the rage in recent years. We can’t dispute the fact that having your favorite country singer participate in one of your life’s biggest moments is something to remember!

During Lynch’s monologue he mentioned how glad he was to be there and admitted that he had worried the show might be cancelled due to the wildfires that were in the area. He then told the crowd that he had met a firefighter and invited him on stage.

After recalling the conversation the two had during a pre-concert meet-and-greet, Lynch asked Taylor to join him and Tony on the stage then passed the mic to Tony so he could tell the crowd about the devastating fires that had been ravaging the area. But, things took a surprising turn when Tony turned to Taylor.

“Ever since I met you three years ago, you had me stuck out in the middle of nowhere, seeing red, 100% deeply in love with you. So, I wanted to ask you tonight. Will you make me the happiest man in the world and ask me…what are you doing the rest of your life?”

Taylor didn’t hesitate to say “yes” and the couple shared their first dance as an engaged couple on stage as Dustin Lynch serenaded them with his hit song “Cowboys and Angels.”

Watch Tony and Taylor’s beautiful engagement in the video below.