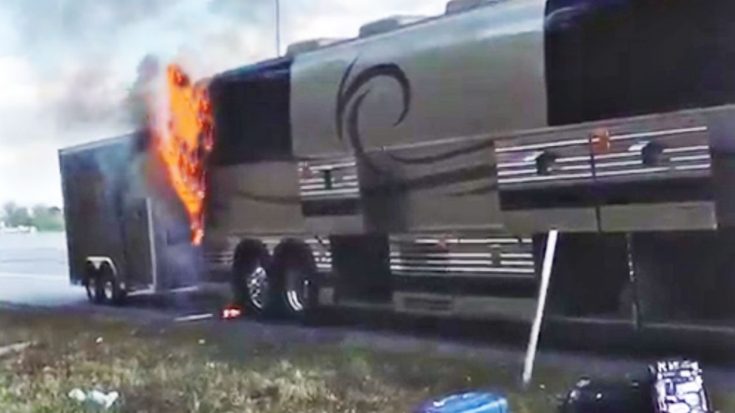 Just days after his bus burned down on the side of the highway following an explosion, the rising country star finally comes clean about what happened during the moments afterward…

Late Sunday afternoon (October 30th) country singer Chris Lane heard a loud explosion coming from the back of the bus and just seconds later panic ensued as all those aboard his tour bus realized that the explosion had sparked a fire that was quickly engulfing the bus.

A mere 15 minutes outside of Nashville, the team had traveled a massive distance to get home from New York and were in the final stretch along Interstate 65 before the bus burned down with all his gear inside.

“Our bus is on fire right now. Our bus is literally on fire,” Lane exclaims in the video he shot after getting to safety from the bus. Fortunately everyone was okay in the incident, but in a new interview he opens up about the scary moments following the explosion.

“Honestly, I don’t know what happened yet,” He began, telling Taste of Country about his surreal experience. “We were almost home from a long trip…and a loud noise happened in the back lounge – next thing we know it all went up in flames.”

Apparently there were just a few people in the rear quarters of the bus when it happened, but nobody really knew what the loud explosion was until the flames blasted through into the bus.

Tragically, all of Chris Lane’s tour outfits and whatnot were located in the rear of the bus and were unable to be rescued.

Watch the video below where he opens up about the scary experience.