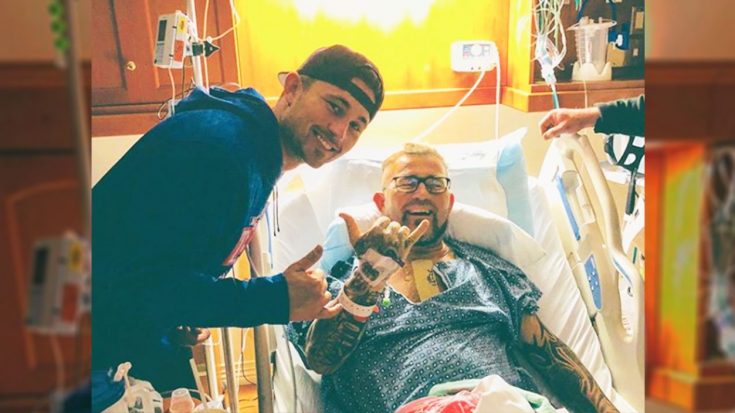 Before the new year, country singer Michael Ray took to social media to ask his fans to keep his father in their prayers as he headed into open heart surgery.

“Dad Since Day 1 [sic] you have had my 6 and I’ll always have yours… please send good vibes and prayers to my pops has [sic] he goes into open heart surgery this morning. Love you all!” wrote Ray via Instagram alongside a photo featuring himself and his father on Dec. 28.

Dad Since Day 1 you have had my 6 and I'll always have yours… please send good vibes and prayers to my pops has he goes into open heart surgery this morning. Love you all! MR

In addition to his post, fellow country singer Darius Rucker took to Twitter to send prayers Ray’s way by writing, “Love him. Will be saying many prayers my friend. Y’all keep the love flowing!!”

Love him. Will be saying many prayers my friend. Y’all keep the love flowing!! https://t.co/Atk107Eoa9

Ray once again took to social media to give an update on his dad’s surgery on New Year’s Eve. While his father was still recovering in the hospital, Ray revealed that he and his friends packed up their car and drove to surprise his dad in the hospital and ring in the new year with him.

What do you do when your pops is still in the hospital after having open heart surgery on New Year's Eve?……. you pack a car load of ppl and surprise him and bring in 2018 with your main man with a big whisper of "happy new year" when it strikes 12 midnight in the hospital! Thank you all for the positive vibes and prayers that you all have sent during this time! He is doing amazing and couldn't do it without y'all. Love you all and thank y'all for an incredible 2017 cant wait to see what we will do and build together in 2018! Pls be safe tonight. #happynewyear Much Love MR

He said his dad is doing “amazing” and thanked his fans, saying, “Thank you all for the positive vibes and prayers that you all have sent during this time.” In a previous post, he said his dad is “on the road to recovery.”

Ray is best known for his debut single “Kiss You in the Morning,” which hit number one on Billboard‘s Country Airplay chart in 2015. Prior to his own success on country radio as a solo artist, Ray co-wrote Big & Rich‘s 2015 single “Run Away With You” with John Rich.

A couple days after his dad’s surgery, Ray posted a video of them jamming together to the Hank Williams Jr. and Waylon Jennings song “The Conversation.” You can watch it below.

Thank you all for the good Vibes and Prayers you all sent. Dad is out and now on the road to recovery. Pls continue to send some more when you can as it's a long road. Thank you to Dr Cook and his team of Surgeons at Leesburg Regional for taking such great care of him! Wanted to post this video from a few weeks ago when Dad and my uncle came to #nashville and we had a late night #hankwilliamsjr jam! Looking forward to more of these. Much Love to each and everyone of you! MR #justthemusicandtheman #theconversation