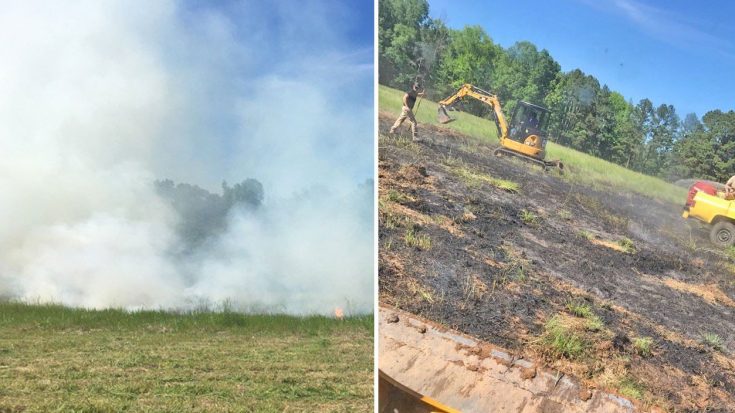 After starting a successful country music career in Nashville, Justin Moore and his family moved to the tiny town of Poyen, Arkansas. It’s where he grew up and after buying the land from his grandfather, he and his wife, Kate, decided to build their dream house in the 300 person town.

“[The land has] been in our family since the late 1800s, so it ain’t no sellin’ it. You don’t go build a nice house in a town of 300 people and expect to be able to get a return on your investment. That ain’t gonna happen. So, we’re gonna be there forever,” he told Taste of Country.

Since residing in Poyen, the Moores have welcomed their third daughter, and now, are expanding their family once again with baby number four on the way. A normal day on the Moore compound took a turn for the worse when a fire started in his pasture.

After it was contained, Moore shared photos of the scary incident, using the caption, “So, this happened today in my pasture. Not on purpose, I might add.”

So, this happened today in my pasture. Not on purpose, might I add. Thnx to Poyen vol FD, ended w/o a disaster pic.twitter.com/FD74uFDdqV

He went on to thank the Poyen Fire Department, who extinguished the fire quickly. Moore also shared a photo of the land once the fire was completely out.

We’re happy everyone is okay and that the fire department was able to get there quickly to put it out without much more disaster. Watch his music video below for his hit song, “Small Town USA”, which was inspired by his love of Poyen, Arkansas.