By Manly Bryant on January 23, 2017
Advertisement 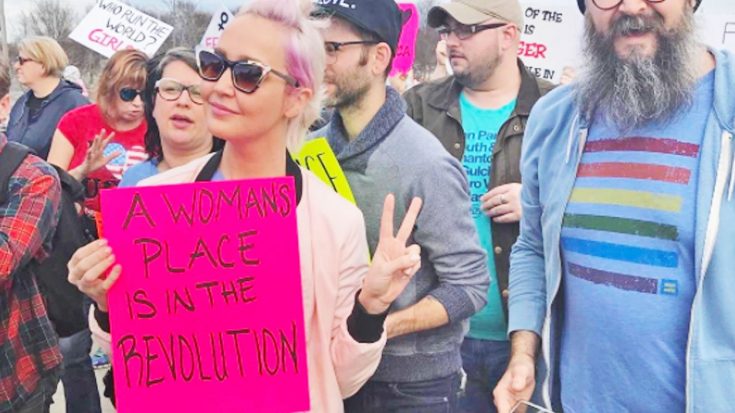 Over a million people marched Saturday following the inauguration of President Donald Trump in cities across the nation in protest. Emotions running high on both sides of the political spectrum caused many people to take to social media to vent on the state of the nation, country stars being of those to comment.

Showing a variety of different reactions to the women’s march, some of the artists offering up their personal insights include: Brothers Osborne,  Cam, Kacey Musgraves, Wynonna Judd, LeAnn Rimes, and Karen Fairchild. In addition to those speaking out on social media, Meghan Linsey – who recently spoke out on her own quiet struggle with sexual abuse by unnamed music mogul – rolled deep in the Nashville march.

A Woman’s place is in the Revolution ✌?❤️ #WomensMarch #nashville pic.twitter.com/xzTeMFoiME

Country stars in support of the women’s march are found below:

Saw the women’s march this morning on the way to the airport. The first amendment at it’s finest. ???

Thank you to @iischristy and all other minority women who marched on my behalf and the #womensmarch – these women don't have the same privileges I do, but still marched for us all. I see you. That is courage. That is faith. That is honor. That is the highest form of compassion. I promise to work hard to fully understand your perspective so I can return the favor, give the deepest compassion back, and fight for your rights. Not just during marches, but in real life, for the rest of my life. That is the gratitude you deserve @womensmarch

Today and every day.

When women rise, the nation rises.- Jan. 21st @womensmarch Proud to be a woman today and everyday. In support of women's rights, human rights and equality for ALL. Praying that we all rise together in LOVE! #womensmarch #andweriseup #riseup #equality #womensrights #womensupportingwomen #longlivelove #longlivesisterhood #theartisttable

While he never stated his personal opinion on the march explicitly, Charlie Daniels (a strong supporter of military veterans who recently spent his 90th birthday raising money for war veterans) spent much of Saturday releasing a series of tweets expressing his support of the new president.

Whats hard for the far left to understand
The movement that elected Trump is not political but anti political,not about “me” but about “us”

In addition, Wynonna Judd spent some of her day engaged with fans in civil discourse via Twitter to discuss the day’s events in Washington, which her sister Ashley was in attendance where she read a poem entitled “Nasty Woman.”

So what do you think about this? Do you agree with them? Let us know in the comments!