By Miranda Raye on March 12, 2018
Advertisement 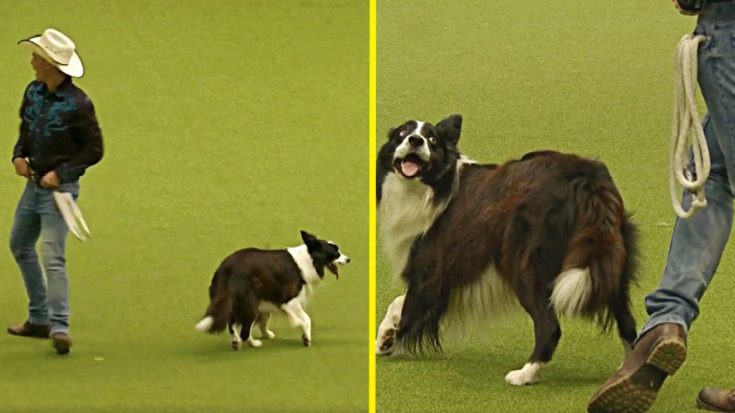 Back in 2011, Big & Rich teamed up with Gretchen Wilson to record the ridiculously catchy “Fake I.D.” If you’ve ever heard the song before, you know it’s one you can’t help but dance to.

It stands to reason that the Top 50 hit “Fake I.D.” inspires people to get up and get moving. After all, the song was part of the soundtrack from the 2011 remake of Footloose.

But people aren’t the only ones who feel like grooving along to “Fake I.D.” As you’ll soon see, there’s one smart pup out there who enjoys dancing to it too!

Every year, dog lovers unite in the UK for the famous Crufts dog show. In addition to hosting a traditional dog show where a best in show winner is named, Crufts also has agility, obedience and flyball competitions.

“Heelwork to Music (HTM) is a relatively recent competitive activity in which participants devise routines of up to four minutes, set to music, and perform the routines with their dog.”

Recognizing how much fun “Fake I.D.” is to dance to, one handler decided to craft a routine for himself and his dog to showcase at the 2018 Crufts show. Dressed as a cowboy, the man took a bow in the arena while his trusty Border Collie did the same.

From there, the two broke out into a complicated, four-minute routine that featured a variety of moves. Dog and man worked completely in tune, with the dog never losing focus even at a distance from the handler.

The best part of the duo’s routine came at the end, which is when the dog latched on to his handler’s lasso and wrapped it around him. After that, the pooch did a little dance on the handler’s back to celebrate, and it was a celebration well-earned!

As of press time, the spunky pup’s routine has been watched nearly five million times. When you check it out below, you’ll understand why this video has spread like wildfire!

Someone needs to make this dog the star of a new Footloose movie!

Yee haw! A cowboy and a good boy!