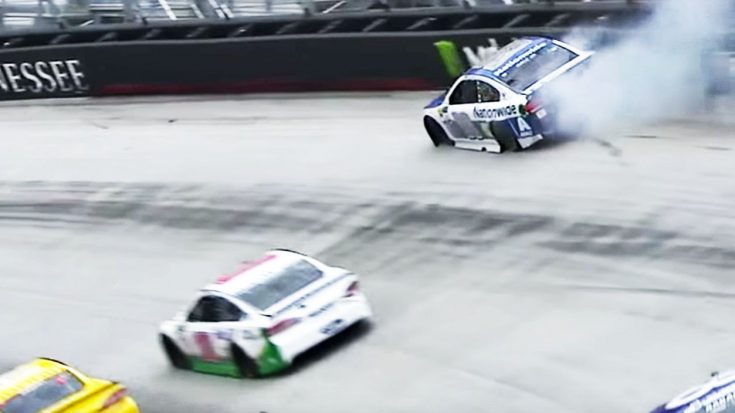 One of his first hard hits since he was cleared to begin racing again, he shot straight into the outer wall during Monday’s rescheduled Food City 500.

Dale Earnhardt Jr. was running just fine with the other cars when, the footage shows, he veered off from the running group and shot into the outer wall, resulting in a pretty hard hit and leaving his car smoking from several points.

His close call could’ve been much worse, but even so – nobody was going to take a chance after his season-ending injuries sustained last year. Following those concussions, it’s likely doctors and Dale Jr. are on edge with each bump and slight crash he endures.

The crash sent Dale Jr. straight into the infield care center for an examination after he was forced to end the race early due to the issues with his car.

“We broke something in the oil system and oil got onto the tires,” He explained to USA Today. “We got into the wall. Obviously, it wasn’t a real hard lick.  I got the car slowed down a little bit and it really didn’t damage the car too badly.  Had we not had something terminal with the oil system we would have slapped tires on it and kept going.”

With the crash knocking him out of finishing the race, this marks his fourth 30th-or-worse finish this season and dropped him a total of four spots.

Even though he says that he feels good, everyone’s gonna be watching him going forward.

Watch the full video of the crash below and let us know what you think in the comments.