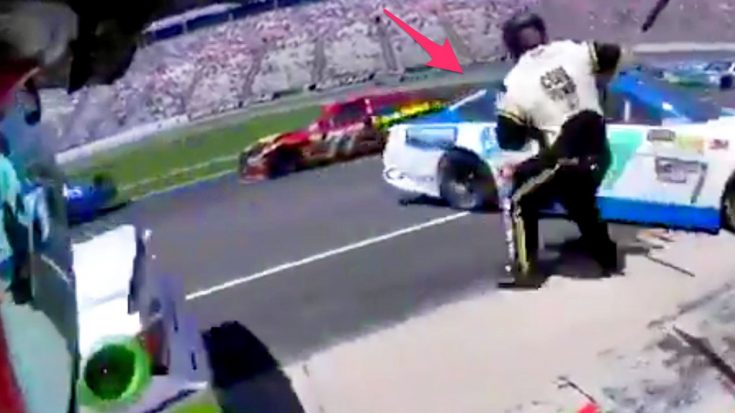 The car sped into the pit area and lost control before slamming into the jackman who was headed out.

Driving the No. 37 Scott Products car during the O’Reilly Auto Parts 500 this last weekend (April 9th) at Texas Motor Speedway, NASCAR’s Chris Buescher was forced to turn into the pit after nearing a Top 10 spot.

As he made his approach onto pit road with a slew of other cars, fellow NASCAR driver Erik Jones tagged him from the right rear, forcing him into a fast-moving spin toward his crew members.

Commentators called Jones’ flub a “rookie mistake” and one that could have turned out much worse for the crew member.

When Buescher went into the spin, his jackman, Zack Young was heading out toward the car to do his job, already dodging the other drivers flying into their respective spots – and was right in the way of Buescher’s out-of-control car.

In the video, you can clearly see the speed at which the car makes contact with Young and sent him literally flying back toward the pit wall. Young was transported to the infield care center and treated for his injuries, leaving his hand in a cast which he uploaded to social media.

In a post-race statement, Buescher expressed his regret for the incident and said, “It was really disappointing to be involved in the incident on pit road.”

Luckily for Buescher, a nearby jackman for Ty Dillon quickly stepped in to help keep the flow of things going while Young was out.

Watch the videos below of the incident from different angles and let us know what you think.

We are thankful nobody was seriously injured in this incident and that Young is doing fine.