By Manly Bryant on October 2, 2017
Advertisement 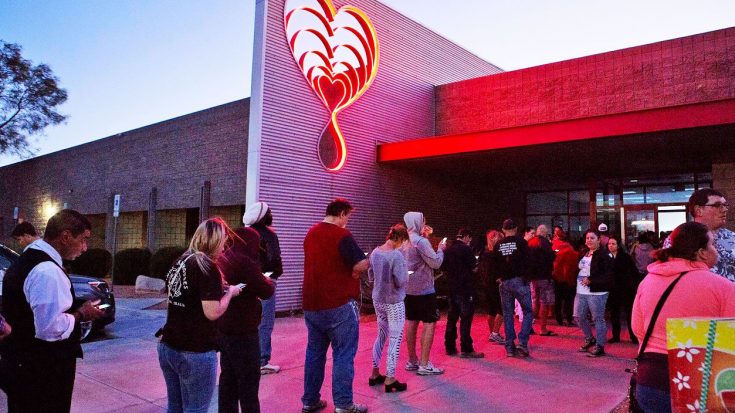 Almost immediately after a country festival was terrorized by a gunman shooting the crowd, people in the area leaped into action in order to help those injured during the horrifying attack.

Now known as the deadliest mass shooting in U.S. history, the incident that occurred at 2017’s Route 91 Music Festival on Sunday, October 1st happened while country singer Jason Aldean was performing. A single gunman opened fire from his room on the 32nd floor of the adjacent Mandalay Bay hotel and killed at least 58 people, injuring more than 515 more.

Within a few short hours after the shooting stopped and incredible first responders were on site helping transport the wounded, people in the area flocked toward local blood banks – nearly overwhelming them with the response.

In an interview with Bridget Bennett, United Blood Services Regional Director Erik Hill spoke about the massive influx of donations and how he was able to open the local donation center in the early morning hours.

“We’ve had people here since probably two o’clock in the morning, so I opened the doors and let them in,” Hill said. “And we’ve been calling our collection staff to come in…we’ve been drawing [blood] since about 4 a.m.”

That same blood bank saw more than 130 people sign up to donate blood in the hours since they opened the doors. A normal day for United Blood Services is around 1/3 of that.

Photos and videos from people headed to the local blood banks show massive lines of folks waiting to donate and waiting rooms brimming with people preparing for collection.

Several locations have announced blood drives starting early on Monday morning and a list of others has been disseminated on social media.

Our thoughts and prayers are with everyone affected by this heinous act of violence.

Take a look at the outpouring of support below from people in Vegas lining up to donate blood and if you’d like to help out, visit the verified GoFundMe Page.

The line to donate blood is out the door at United Blood Service. People have been here all night waiting for it to open #GMLV pic.twitter.com/D5VQeEjAYF

#VegasStrong out in force to support those in need after the horrific action last night! Come out and help anyway you can. #DonateBlood pic.twitter.com/f1ZRrMwbD5

It’s 6:40 am, and there is a line out the door and around the block. People waiting to donate blood at United Blood Services. #RJ pic.twitter.com/sGRMpUOHXc

Pic from inside blood donation center on W Charleston. Packed. You can help too @KTNV @BethFisherTV pic.twitter.com/tPemr6ikyq

If you’re in Las Vegas and want to be a hero — donate blood. They’re desperate for supply to save lives. Here’s where to go: pic.twitter.com/nBAVtHH9Zu