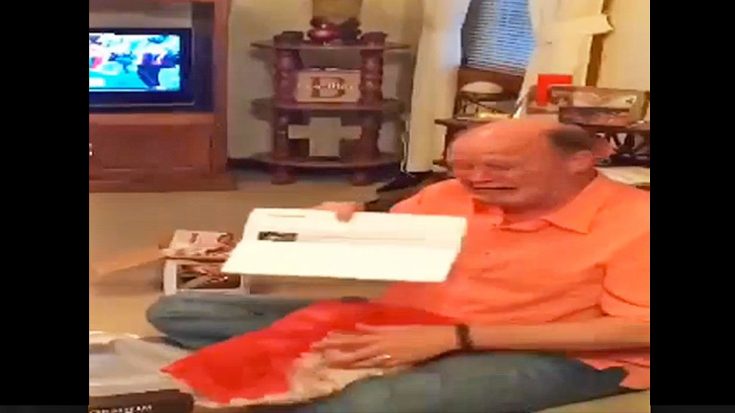 One father was given an unbelievable gift that is sure to be just as unforgettable as the concert he will be attending with his family come February of 2017! Dale Berryman lost his father in 1991 and, like the rest of society, he clung to music to adequately heal his broken heart. Dale was a fan of one song in particular, however, continuously delving into the inspiring lyrics from the emotional ballad “The River” by Garth Brooks.

Dale’s daughter Megan knew that this holiday season was an opportunity for greatness, seeing that Brooks and his wife Trisha Yearwood are set to perform in Tennessee. Megan told WRCB, “He was talking about going non-stop when he found out that Garth Brooks was coming!”

This prompted the award-deserving daughter to fulfill one of her father’s dreams, and what better time than during the joyous holiday season?

Megan recorded her father opening his gift on Christmas morning, as she instructed him to quickly read a homemade booklet before tearing into the big surprise. Dale slowly read from the array of cards that meticulously used different titles from Brooks’ hit songs to formulate a heartwarming letter.

This eager father started bawling before the reveal, as he knew he was in for something major! As he carefully unwrapped the tickets, he began to sob in disbelief and sheer excitement! Megan explained that she has snagged floor seats, virtually placing them at the edge of the stage! We don’t think Christmas could get any better for this much-deserving pop!

Watch his reaction below and tell us what you thought!