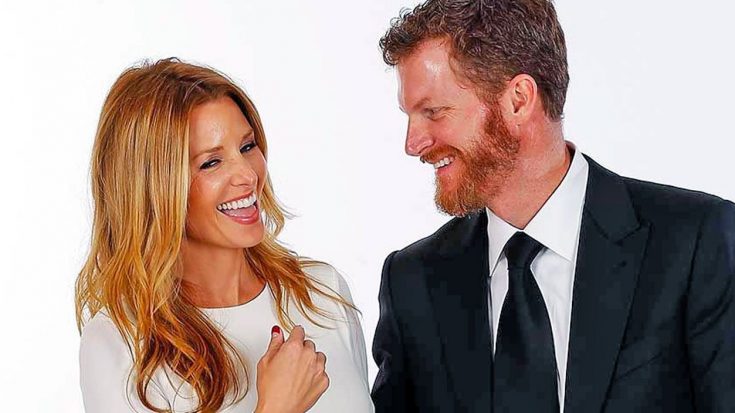 With only one week to go until their big day, NASCAR royalty Dale Earnhardt Jr. and his fiance Amy Reiman are celebrating in their own unique ways. According to a Twitter post, Earnhardt just returned from a bachelor trip. While the groom didn’t spill the beans about where he and his buddies went, he did indicate that it was somewhere out of the country.

Wheels on the ground. Glad to be back home. ??
Bachelor trip was fun times and 0 drama. ??

Reimann, who will marry Earnhardt on New Years Eve, took to Twitter on Friday morning to thank her bridesmaids for her bridal shower. In the photo, Reiman and five of her friends stood beneath a crystal chandelier donning 18th century garb, complete with white wigs and big dresses.

I cant thank these beauties enough for the coolest shower ever! I think we nailed it! ❤️ yall so much. #marieantoinette #bridesmaids pic.twitter.com/8iOPnRQx2e

The wedding will bring a happy ending to 2016 for Earnhardt who has had a rough year after having to withdraw from most of the NASCAR racing season after sustaining concussions following two crashes earlier this year. Doctors recently cleared the driver to compete in 2017, something Earnhardt credits his future wife with helping him achieve.

“Amy has been there every step of the way pushing me to stay focused and to realize the progress we have made and to keep working hard,” said Earnhardt.

“Amy’s been great. She’s been there every single day pushing me. Without her, this would be nearly impossible to go through,” Earnhardt said. “So, that’s been awesome to have her with me every day, and available to help me. And she doesn’t complain and she’s right there with me doing all the exercises. She even does the exercises that I’m doing just to be healthy herself.”

Earnhardt and Reimann got engaged during a family trip to Germany in 2015.