Dale Jr. Confessed To Dad He Wanted To Quit NASCAR

By Manly Bryant on August 31, 2017
Advertisement 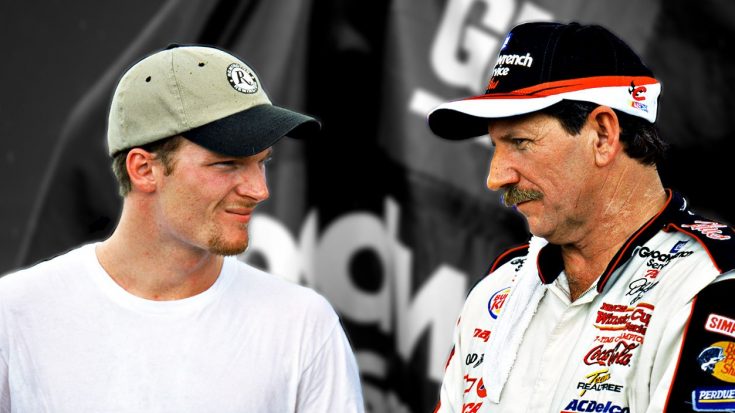 In a new video, NASCAR’s most popular driver recalls saying “I’ve got a real bad problem” to his pit crew during one of his rookie season races – a moment that would lead him to telling his father, Dale Earnhardt Sr., that he didn’t want to drive anymore.

Darlington Raceway is full of racing history and has been nicknamed “The Track Too Tough to Tame” because of the bizarre track design and how difficult it is for teams to set up handling for both ends of the oval.

As part of his retirement video series, Dale Earnhardt Jr. opens up about a very difficult moment in the beginning of his career – and explains that he told his father he wanted to trade his fire suit in for a business suit.

Running in seventh place, Dale Jr. can tell the car has a problem, but his team remains skeptical and doubtful of his claims.

He calls over the radio to his crew saying, “Something’s wrong…I’ve got a real bad problem,” but they aren’t buying it. Eventually, Dale Jr. ends up in the wall and returns to the garage.

“I wouldn’t get back into the car – they were gonna fix it,” Dale Jr. recalls. “I said ‘I ain’t getting back in there and driving that thing, something’s broke!'”

After getting into a cussing match with his crew chief and being called a quitter, Dale Jr. decided he was going to leave. Before he could take off, he had to wait for his father because they were flying out via helicopter.

“I got in the helicopter and said, ‘Dad, I don’t wanna race no more – I’m done’,” He continued. “I said, ‘Give me a damn desk job, man. I don’t wanna drive these cars if you gotta deal with people like that and get treated that way’.”

Once the father-son NASCAR pair were back at the shop and the mechanics had gone through the car, he found out that the entire axle had been stripped out – a fact he made sure to tell anyone who would listen. He even carried the stripped axle around the shop all day with him!

We are so glad that this story turned around for Dale Jr., because he may not have continued racing and become the amazing driver we know him to be today!

Watch Dale Earnhardt Jr. tell the full story about the time he told his dad he wanted to quit NASCAR in the video below.

Reflecting back on my first races at @TooToughToTame and one specific time there during my rookie season. #Appreci88ion pic.twitter.com/z53g0RXxIe