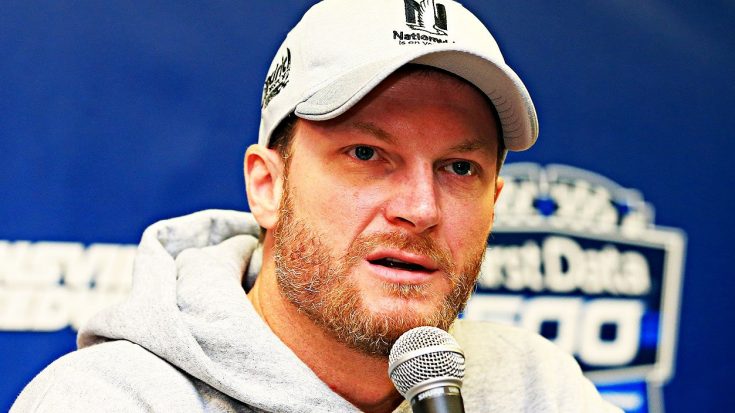 He ended his career over the risk of permanent injury due to crashes and changed gears to focus on his personal life…but it appears that the effects of his previous medical condition still haunt him.

Dale Earnhardt Jr. opened up to his friends and fans in a recent podcast episode. The longtime driver and NASCAR star explained the panic he felt during a race at Martinsville.

“Something weird happened on Saturday,” Dale Jr. says on his Dale Jr. Download podcast. “The practice started and I was like ‘Steve let’s go over to the pit wall at turn three…and watch some practice.”

But this was when all the problems started.

As Dale Jr. continues explaining the story, he reveals that he was watching all these souped-up stock cars fly by the corner – just 25 feet from them!

After suffering several major head injuries and concussions during his 2016 season and was forced to exit for the remainder of the series. He returned for a final season in 2017 before finally retiring.

Watching the cars fly by the corner turn in the track was a great experience, but after a few minutes, Dale Jr. started to exhibit much of the same symptoms he had from his concussions.

Feeling nauseous and uncomfortable, panic started to set in and really freaked him out, so he decided to exit quickly. Making an excuse to his friend about needing to leave, he moved away from the track and got over to his sponsor’s team hauler.

It was only then that he began to feel slightly better.

“It took about 30 minutes for that balance and nausea to go away…so I got real freaked out,” he continued. “Like,’Man something’s wrong with my head.’ It just reminded me of those symptoms from so many months ago.”

When he got home, Dale Jr. dialed up the specialist he’d been consulting with during his treatment and rehab from the serious concussions he had back in 2016.

Although Dale Jr. was worried and panicked about his symptoms returning, the doctor had much better news for him – explaining that the feelings he had weren’t stemming from his concussions. They were something else entirely.

Speaking with the doc, he soon realized that he had never been that close to the cars and watching them before. His career was filled with many other activities. His doctor agreed and explained that it was just the natural feelings anyone would have watching that kind of motion for the first time.

See the full story below as Dale Jr. explains it in full.