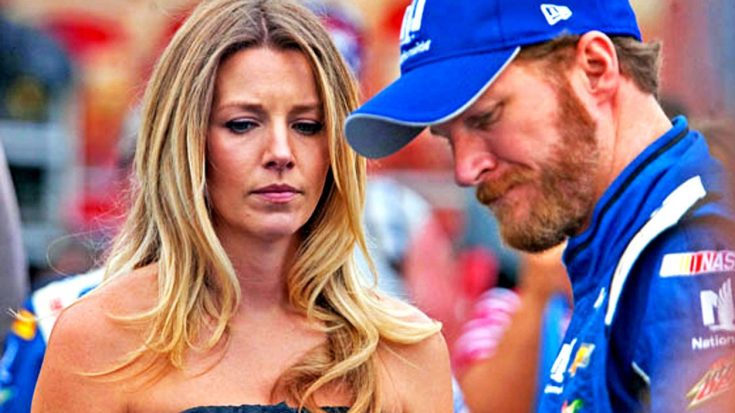 Standing by her man, the newly-married wife of NASCAR‘s favorite driver opened up about her feelings on his retirement through a statement to followers and fans that explained how his speech made her feel.

Through a press conference held on Tuesday (April 25th), Dale Earnhardt Jr. explained to the media and racing industry exactly why he had chosen to retire following 2017’s racing season and all the contributing factors to that decision. One of the largest reasons was due, in part, to his wife Amy Earnhardt nee Reimann.

“Most of you have been around long enough to know what I was like before I met Amy,” he said. “Not a day goes by when someone doesn’t remind me of the incredible and positive impact she has had on me. Through thick and thin, Amy’s support and encouragement has been constant.”

It’s clear that when he says he’s retiring now because he want’s to “go out on [his] own terms” that he means he’s protecting his health and making a conscious decision to exit before a serious injury jeopardizes his quality of life – especially his life with Amy.

Recovering from a major head injury last year, Dale Jr. was forced to quit the season about halfway through and he got a taste of the effects that a serious injury could have on his and Amy’s lives.

“She went through it too,” Dale Jr. revealed about his recovery and rehab from the nearly-debilitating concussions. “The only difference is that she didn’t have to – but she did. There were no days off or hours off, or minutes off. It was just Amy and me. Without her help in those days of recovery, I wouldn’t have been able to return to the track this season.”

Now, in her own statement to friends, family, and fans, Amy Earnhardt opened about what his thoughtful and loving words meant to her.

He is always so eloquent in explaining how he feels. This is one of the many reasons I love you. https://t.co/PGKxdKe8Ib

She poured her heart out to him expressing the love she feels for him and explaining that it’s his recognition and true, genuine, appreciation put in one of the best-spoken ways possible that reminds her, again, why she loves him so much.

It’s incredibly sweet the connection and bond these two share and we wish Dale Jr. the best as he continues to race this season – and beyond, in whatever endeavors he and Amy seek out in their future.

Watch an incredible interview with the newlyweds and NASCAR star Jeff Gordon below.