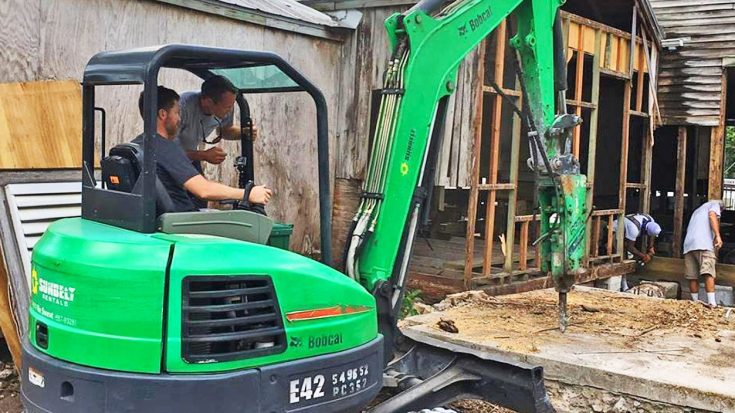 During one of the few mid-season off weeks in NASCAR, this beloved driver and his wife took to Key West, Florida for a new project that soon will be appearing on national television!

Dale Earnhardt Jr. and wife Amy Earnhardt first announced their partnership with DIY Network in May 2017 and revealed that they would be filming a brand new TV show centered around a fantastic home remodel.

In the week leading up to Darlington’s Throwback Race Weekend, Dale Jr. and Amy shot straight over to their project house for three full days of action, adventure, and demolition!

“Spent the last 3 days working like crazy on a renovation project with [Amy Earnhardt] and [Steven Krieger] for our [DIY Network] show coming early 2018,” Dale Jr. posted on Instagram. “Long way to go but it’s loads of fun.”

Through a series of photos, Dale Jr. shows off some incredible moments in this massive undertaking. Clearly this is just the beginning of the remodel because most of what you can see them doing is demolishing and removing various parts of the home’s exterior.

Along with photos of himself, wife Amy, and Krieger doing lots of manual labor, Dale Jr. also shared a picture of him operating a Bobcat with a jackhammer attachment, as well as a photo of he and his wife giving an in-depth interview with the cameras.

We can’t wait to see this show and check out the finalized project – with these two at the helm, it’s sure to be amazing!

Check out all the photos from their new project below!

Spent the last 3 days working like crazy on a renovation project with @mrsamyearnhardt and @steven.krieger.121 for our @diynetwork show coming early in 2018. Long way to go but it's loads of fun.