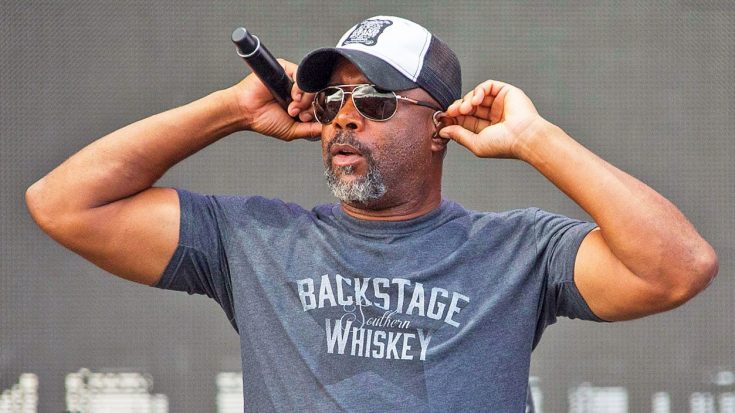 With fame comes criticism, and this is something that country stars know well. In the age of social media, it has become easier for people to voice their displeasure with various country artists. Although the artists often have millions of followers, they sometimes notice the insults hurled at them online.

Such was the case for Darius Rucker on Friday (July 28), who came across an insulting tweet that was directed at him. It all started when SiriusXM VOLUME tweeted a link to Rucker’s video for his new song, “For the First Time.” The channel sent out the tweet to declare that the song had claimed the tenth spot on its “New Music Friday” series.

That tweet prompted one follower named Abbey Brown to share her thoughts on Rucker’s singing abilities! What she had to say wasn’t exactly a compliment. Instead, she proclaimed that he only sings three notes, and has since his Hootie & the Blowfish days.

Still singing the same 3 notes he always has. Terrible stuff!

Rucker just so happened to come across Brown’s tweet, and responded in the perfect way possible. He made it clear that the insult didn’t bother him, saying that if he only sings three notes, then they’ve helped him have a great career!

Those 3 notes have given me one hell of a 25 year career. Thank you for the kindness!! Hahahah https://t.co/qm2z0Kkexh

After Rucker responded, Brown replied with an apology. “It’s not my cup of tea but it obviously makes people happy!” she wrote “That’s what’s important.“

Rucker’s career is as hot as ever right now. His single “If I Told You” hit number one on the U.S. Country Airplay chart following its release in July 2016. He is also preparing for the release of his new album When Was the Last Time, which is set to debut on October 20.

“For the First Time” is Rucker’s latest single off of that album, so check it out below. When you’re done, let us know what you think of his response to the twitter troll. Did he handle it well?