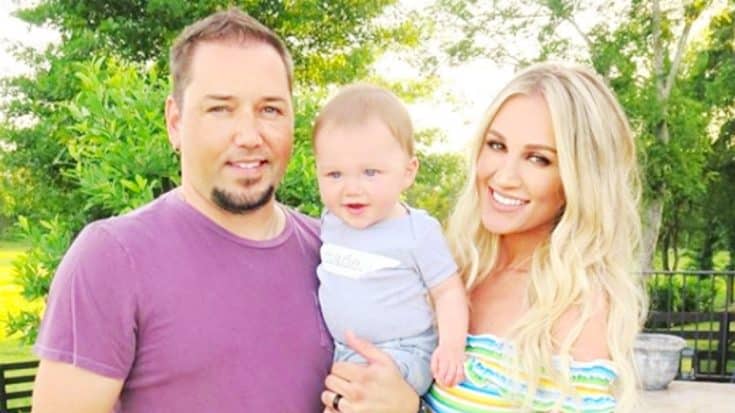 Back in April, Jason Aldean‘s wife Brittany was a guest on the Babes and Babies podcast. During the podcast, she talked about her struggle to get pregnant with their first child together, son Memphis.

After undergoing in vitro fertilization and having surgery because of endometriosis, Brittany was finally able to get pregnant with Memphis. He was born on December 1, making him seven months old already.

Even though Memphis was only four months old at the time that Brittany was interviewed on Babes and Babies, the hosts asked if she had any plans to have a second child. She came back with a surprising answer, saying she and Jason’s attitudes were “the sooner, the better” in relation to having another baby.

That’s the exact plan that Jason and Brittany followed, because they’re now expecting their second child together! The couple shared the exciting news on Tuesday (July 10), with each one posting an adorable photo of Memphis wearing a “Big Brother” onesie.

“Sup everybody……. guess who is gonna be a BIG brother!” Jason wrote in the caption to his photo

“Here we go again!” Brittany wrote in her caption, which also included a bunch of emojis.

But it turns out the Aldean’s pregnancy reveal wasn’t the only big news they had to share with their fans. The day after they revealed they are expecting baby #2, they came back with another exciting announcement.

As Brittany shared on Instagram, she and Jason are working on building their “dream home” in Tennessee!

Posting a photo of a dirt road that leads into a build site in the middle of a wooded area, Brittany revealed they had a piece of land to build a new home on. She expressed her joy, saying how she can’t wait for her kids to grow up in the new home.

“Looking at the land it’s hard not to envision a place where our babies will run, laugh and play with each other for so many years to come,” she wrote.

And so our new journey begins… we’ve decided to build our dream home in Tennessee☁️ Looking at the land it’s hard not to envision a place where our babies will run, laugh and play with each other for so many years to come… I can hardly wait to hear those little feet running down the halls?

Looks like the Aldeans have a whole bunch of reasons to celebrate right now. Congratulations to them on their new baby and their future new home!