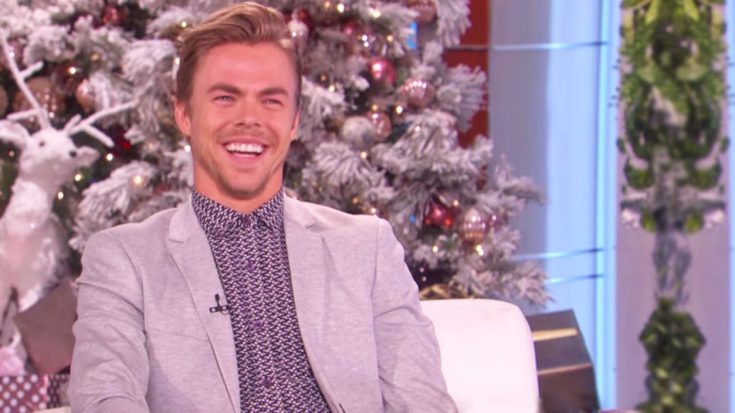 Could there be another Dancing with the Stars wedding on the horizon? In an interview with Ellen DeGeneres, Derek Hough sat down to discuss everything from marriage, Hairspray Live!, and his decision to leave DWTS.

After acting as the best man to DWTS costar and longtime best friend, Mark Ballas, in his recent marriage to BC Jean, the notorious bachelor may just be considering settling down.

Such an honor to be the best man at my brothers wedding. Witnessing their love be sealed under a beautiful Oak tree in front of family friends was such a special moment. Like the tree May you Stand together tall and proud May you always Go out on a limb for one another. To Stay grounded and dig your roots in deep so that you may weather any storm . And always continue to grow, stronger and higher reaching towards the heavens . And to always enjoy the view . Love you two

Ballas asked Hough to be his best man when they were only 14 years old, adding a bit of pressure to Hough on doing his part in making the big day one to remember.

“He asked me 17 years ago to be his best man. We were 14 years old and so there was a lot of pressure actually,” said Hough. “Luckily it went well…I’ve never been more nervous in my life though.”

The Bohemian style wedding was an enchanting three day event that went off without a hitch. Ballas and Jean said their “I Dos” beneath an oak tree in Calamigos Ranch for a picturesque union straight out out of a storybook. After discussing the wedding, DeGeneres asked Hough the question on everyone’s mind, if he’s considering settling down himself.

“If you had asked me a year ago, or two years ago, I’d probably be like ‘I’m not really looking,'” explained Hough. “But I’m kind of in that place now…But ya I see myself married with kids within the next five years.”

So whose the lucky lady? When questioned further on his current relationship status by DeGeneres, the dancing heartthrob laughed before answering coyly, “Perhaps.”

While Hough may not be returning to DWTS for the next season, you can catch him on Hairspray Live! in the role of Corney Collins airing on NBC Dec. 7. He will also be joining Jennifer Lopez and rapper NeYo at the judges table in NBC’s forthcoming new series, World of Dance.