Despite Backlash, Toby Keith Will Sing For President Trump Again 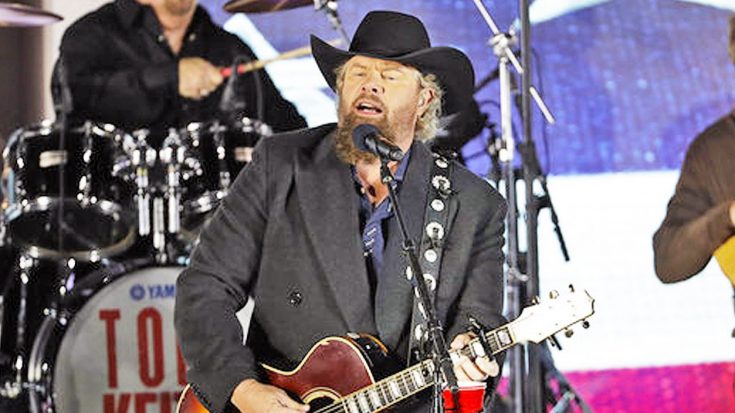 As one of country music’s biggest stars and a proud American, Toby Keith seemed like the perfect person to perform at a concert in celebration of Donald Trump‘s inauguration in January. Along with other artists such as Lee Greenwood and 3 Doors Down, Keith honored our country with some of his patriotic hits, including “American Soldier” and “Courtesy of the Red, White and Blue.”

Keith received some backlash for the performance, with some threatening to never buy his music or attend one of his shows again. But Keith didn’t let all of the negativity get to him, and he refused to issue an apology.

“I don’t apologize for performing for our country or military,” Keith said. “I performed at events for previous presidents [George W.] Bush and [Barack] Obama and over 200 shows in Iraq and Afghanistan for the USO.”

“The memories, the geography lessons, the history lessons, the friends I’ve made [on USO shows are] the reason you can look them in the eye and say, ‘I don’t have to apologize for playing the inauguration,'” he said.

﻿Now, Keith is set to perform at another event for President Trump. As Billboard announced on Thursday (May 18), Keith has been revealed as one of the performers at a concert that matches up with President Trump’s upcoming visit to Riyadh, the capital of Saudi Arabia.

The concert is scheduled to take place on Saturday, and will also feature an Arabian lute player. Concerts had previously been banned in the kingdom for two decades, so Keith’s appearance there is quite monumental.

Other than that, few details about Keith’s performance have been revealed. We’re sure he’ll perform some of the same songs he sang for the inauguration. You can look back on his full inauguration performance in the clip below.

What are your thoughts on this new concert announcement from Keith?