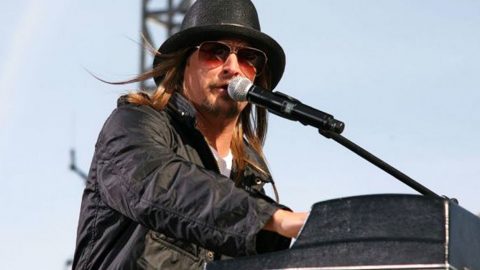 Detroit native Kid Rock outraged some when what was supposed to be an exciting announcement sent disgruntled locals in a tizzy! Rock recently announced that he will be kicking off the newly constructed Little Caesars Arena in Detroit as the first performer to experience the venue and its amenities. While some raised their drinks to celebrate the string of 4 concerts that Rock has agreed to thrill fans with, others refrained from taking an inviting and eager approach.

Perhaps the biggest reasoning behind the upset, Rock has formerly showcased a confederate flag during past concerts, deemed as an offensive action to those who were insulted by the singer’s use of the statement piece. Political director of the National Action Network Michigan Chapter, Sam Riddle, voiced his concern with Rock being granted the first performance in the new establishment, telling The Detroit News, “I’m not against Kid Rock performing, per se, it’s just that this is the wrong opening act for the new arena.”

Some were also discontent with Rock’s profound support of President-elect Donald Trump, as he began to reference the former reality star in various online merchandise that promoted Trump’s slogan and values.

Regardless of the upset, it seems the decision has been made. Are you okay with Rock being the first performance for this new arena?