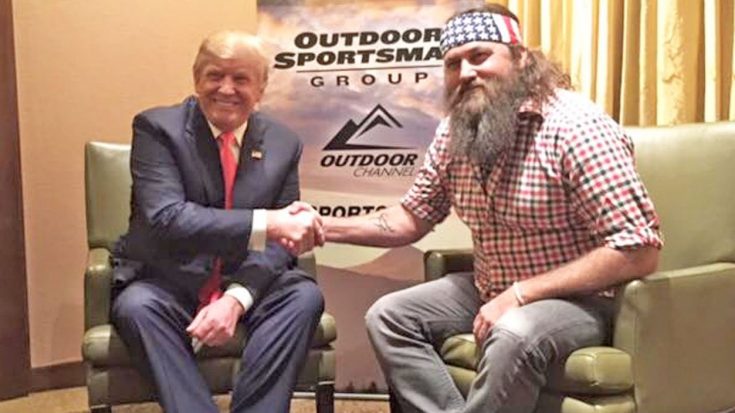 Almost since the beginning of his campaign for President, Duck Dynasty star Willie Robertson has been a huge supporter of Donald Trump. They have been friends for many years and according to Robertson himself, have many things in common.

“We’re both successful business men, we both have pretty big shows on television, and we both have wives that are a thousand times better looking than us,” Robertson said at a rally in September 2015.

Shortly after, Robertson publicly endorsed Trump for president although his father, Phil, had endorsed Ted Cruz. Following Cruz’s departure from the race for President, Phil jumped on the “Trump train” and even supported him at the Republican National Convention, where Willie spoke.

It seems President-Elect Trump should thank the entire Duck Dynasty for his being elected President, and not just for their support. According to The New York Times who retrieved data via Facebook “likes”, “Americans have been clustering themselves into cultural bubbles just as they have clustered in political bubbles. Their TV preferences confirm that.”

The Times’ data revealed that Duck Dynasty’s is very popular in the nation’s rural areas, most prominently in Texas, Arkansas and Louisiana. See their chart below. According to The Times, “The correlation between fandom and the percentage of people who voted for Mr. Trump was higher for ‘Duck Dynasty’ than it was for any other show.”

The newspaper also described the Robertson family as a family of men with long beards with Christian values and lots of money, whereas most of us know that they were already millionaires because of their duck call company, Duck Commander, before Duck Dynasty even aired. Duck Commander is a multi-million dollar company and the Robertson clan were extremely successful even before they were on TV every week.

Although a Clinton win was supposedly inevitable, somehow Donald Trump came out the victor and people are still scratching their heads. Caleb Parke, a conservative writer made a huge observation.

“The mainstream media overlooked the ‘Duck Dynasty’ guys of the world,” he wrote.