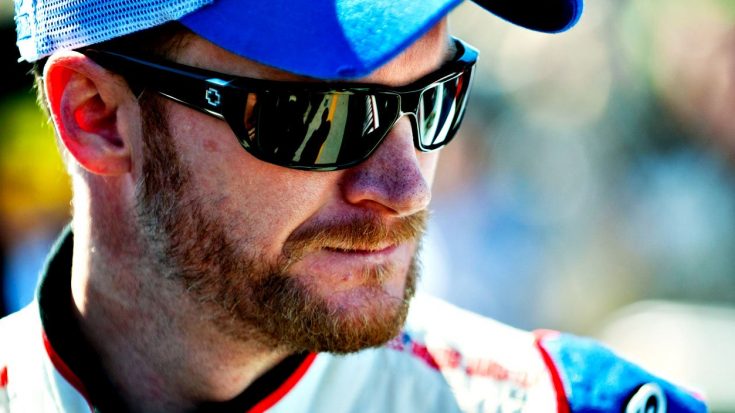 After months of medical tests and rehab, the racing star’s medical team finally admitted that they were going to issue with a change in his diagnosis that could literally affect the remainder of his career with NASCAR.

It was there, under the supervision of his medical team and several highly-skilled neurosurgeons that they decided his fate as a driver.

The 42-year-old racing star is preparing for his upcoming wedding in just three-week’s time and this test was a huge determining factor in knowing what was to expect during 2017.

Earlier this year, Dale Jr. had been pulled from driving after sustaining a severe concussion during two separate crashes this summer. After that, he missed the remaining 18 races of the season – leaving fans (and Dale Jr.) wondering if he’d ever return.

As NASCAR reports, medical director of the UPMC Sports Medicine Concussion Program in Pittsburgh, Dr. Micky Collins, issued a clearance for Dale Jr. following his supervised driving test at the track on Wednesday.

“I expected things to go really well yesterday, and that’s exactly what happened,” Earnhardt said. “Actually getting in a race car was an important final step, and it gives me a ton of confidence going into 2017.”

The five-hour track test saw Dale Jr. crank out 185 laps as doctors watched him carefully and looked for signs that would indicate he was still being affected by the concussion.

“He’s done everything we’ve asked, and we believe he is ready to compete at a professional level again and can withstand the normal forces of a race car driver,” Collins revealed. “Dale has been very open with us, and we’ve had plenty of time for his treatment, so we feel very good about his long-term prospects and how this has been managed by everyone involved.”

With such a good diagnosis, we are happy to report that his return to the track in 2017 is going to be the highlight of the season for some people!

Watch the video below of the crash that caused his concussion during a race in Michigan.